Exclusive: Hero cop who was wounded in 2012 speaks out 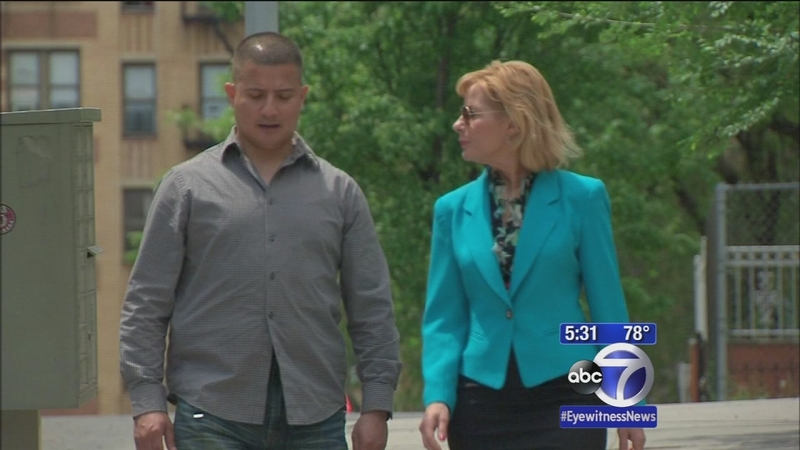 NEW YORK -- A cop's courage under fire. It's video you've never seen before and the story you've never heard before about a wild shootout in the Bronx.

38-Year-old NYPD Detective Nelson Vergara almost died on that night two years ago as he returned home from work and came upon a wild shooting on his block in the Morris Heights Section.

A suspect opened fire on a man on the street and Detective Vergara. Last week, the shooter was sentenced to 10 years for attempted murder and now, the Detective is speaking out.

This is really the story behind the story of a cop who didn't think for a second about stepping into to stop a cold blooded murder right in front of his house.

"I thought he was just trying to kill us all...He began shooting," said Vergara.

When Detective Vergara watches the surveillance video, he still can't believe it happened.

Wallace: "It was a wild firefight."

He has scars that remind him how real it was.

The marine and Iraqi war vet never imagined his home turf would become the battlefield that almost killed him. He was headed to his house in the Morris Heights section of the Bronx on a hot summer night in 2012 when someone on the street threw a bottle at him.

'My guard is down. The last thing I'm thinking is I'm going to get into a fireifight in from of my house," he adds. He points out the vehicle the shooter was in while watching the video with Sarah Wallace.

At the time, Vergara had no idea the man who threw a bottle at him had made the mistake of also targeting 24-year-old Joseph Baez. He came back in a car with revenge on his mind and a gun in his hand.

Wallace: "So he just opened fire."

Wallace: "Did you know you'd been hit?"

Vergara: "I was scared and I thought this is it...I had so many things on my mind...My family right in front of my house."

Vergara's wife was inside their home with their two little girls, and heard the shots.

Vergara saved the life of one man and cops later arrested Baez. He later pleaded guilty to attempted murder and last week Vergara and fellow officers were in court as a judge sentenced Baez to 10 years in prison.

It wasn't the sentence Vergara wanted, but he need to close this chapter and get on with his life. He's been promoted to detective and now works in the warrant squad, chasing down bad guys.
"I love being a cop. I hope I can do it for a long time," he said.