NYPD: Woman drives into Brooklyn deli after fender bender, gets slapped in the face 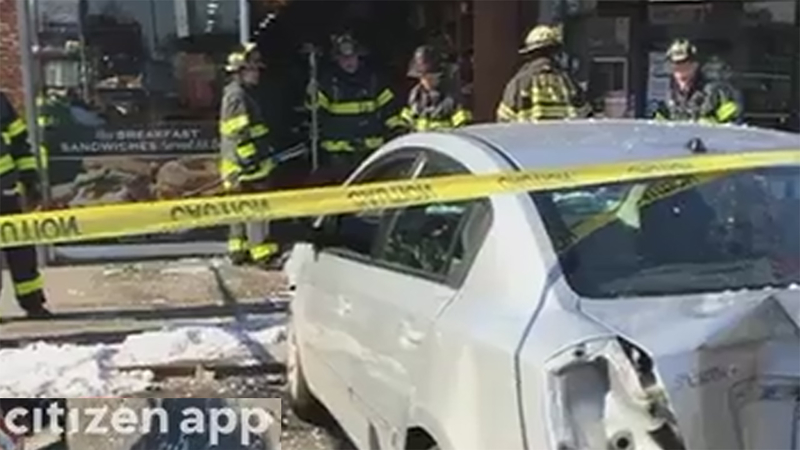 NYPD: Woman drives into Brooklyn deli after fender bender, gets slapped in the face

BATH BEACH, Brooklyn (WABC) -- A woman inside a deli apparently slapped an out-of-control driver who slammed into the business following a fender bender in Brooklyn Thursday morning.

It happened just before 9 a.m. at the Royal Deli on Cropsey Avenue in the Bath Beach section.

Authorities say a 72-year-old woman was stopped at a light when she was rear-ended by a FedEx truck.

The driver became startled, hitting the gas instead of the brake, and accidentally drove into the deli.

Several employees and customers were inside, and two of them suffered moderate injuries.

Authorities say a 47-year-old woman working in the deli then got into a dispute with the driver, which ended with the woman in the deli slapping the driver and breaking her glasses.

Officers took the woman in the deli into custody, and Susanne Pulizzi received desk appearance tickets for criminal mischief and harassment.

Pulizzi lives just around the corner and has worked at the deli for about seven years. She tells Eyewitness News that the driver actually slammed into the store not once, but twice during the incident.

She denies ever hitting the driver, but she admits to stomping on her glasses out of shock and fear just moments after the crash.

"They did arrest me for breaking her glasses," she said. "It's a misdemeanor. I just got released. I don't know why I got arrested for that, but so be it. I could have been dead, you know what I'm saying? So I'm OK. I'm OK. I came out on the other side."

Pulizzi said she has video and eyewitnesses who will prove she never struck the woman. She did say she should not have broken the glasses, but that she's just happy to survived.

She was released pending a future court date.

The Fed Ex driver was not injured.