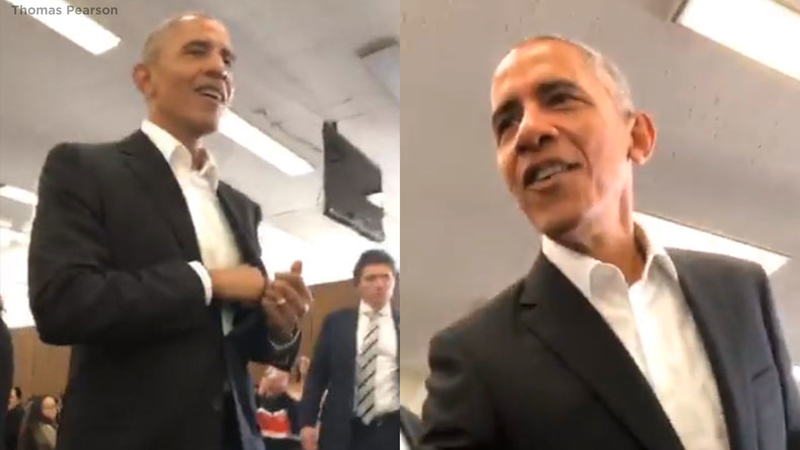 VIDEO: Barack Obama shows up in Chicago for jury duty

CHICAGO -- Former President Barack Obama, free of a job that forced him to move to Washington for eight years, showed up to a downtown Chicago courthouse for jury duty on Wednesday morning.

The 44th president's motorcade - considerably shorter than the one he had when he lived in the White House - left his home in the Kenwood neighborhood on the city's South Side and arrived at the Richard J. Daley Center shortly after 10 a.m.

Obama - wearing a dark sport coat, dress shirt, but without a tie - waved to people who gathered outside after hearing reports that he would be reporting for jury duty.

Whether he will be selected to sit on a jury, and presumably be selected jury foreman, was not known. But if he is like other would-be jurors, Obama will have to watch a decades-old video in which a much younger Lester Holt, who was a local news anchor before he became a national news anchor, explains the ins-and-outs of jury duty.

Obama is also in line to receive the $17.20 a day that jurors are paid for performing their civic duty.

Obama is the highest-ranking former public official to be called to jury duty in Chicago, and almost certainly the only one who ever arrived with a Secret Service detail. But he is not the first former president to be called to jury duty. In 2015, former President George W. Bush answered the jury duty call in Dallas. He was not selected to sit on a jury. And in 2003, former President Bill Clinton reported for jury duty in federal court in New York City. He also was not selected.

Nor is he the first famous Chicagoan to be called to jury duty. In 2004, Oprah Winfrey was on a Chicago jury that convicted a man of murder. A decade later, Lawrence Tureaud, better known as Mr. T, showed up to a suburban Chicago courthouse for jury duty, sporting his usual Mohawk, but without the gold chains for which he is known. But despite the more subdued outfit, Mr. T was not chosen to sit on a jury.
Report a correction or typo
Related topics:
societychicagolooppresident barack obamabarack obamajury duty
Copyright © 2022 by The Associated Press. All Rights Reserved.
BARACK OBAMA
Local, national figures reflect on 1 year since Capitol insurrection
Obama scales back 60th birthday celebration due to COVID concerns
President Obama on healing US racial divide
Up Close: J&J vaccine pause, Why Shane Donovan wants to be the next NYC mayor
TOP STORIES
Man shot in the chest aboard Q train at Canal Street
3 people killed in crash near catering hall on Long Island
Celebrate Israel Parade to kick off in NYC with heightened security
AccuWeather Alert: Still steamy
Heat Advisory issued ahead of possible record-breaking temperatures
78,000 pounds of infant formula arrives in US
NJ police impose curfew after large party gets out of hand
Show More
Suspect breaks into NYC apartment, stabs man to death
Empire State Building lit to honor Notorious B.I.G.'s 50th birthday
Fate of 2,500 Ukrainian POWs from steel plant stirs concern
Biden pushes economic, security aims as he ends South Korea visit
Man killed, woman injured in jet ski accident along Hudson River
More TOP STORIES News