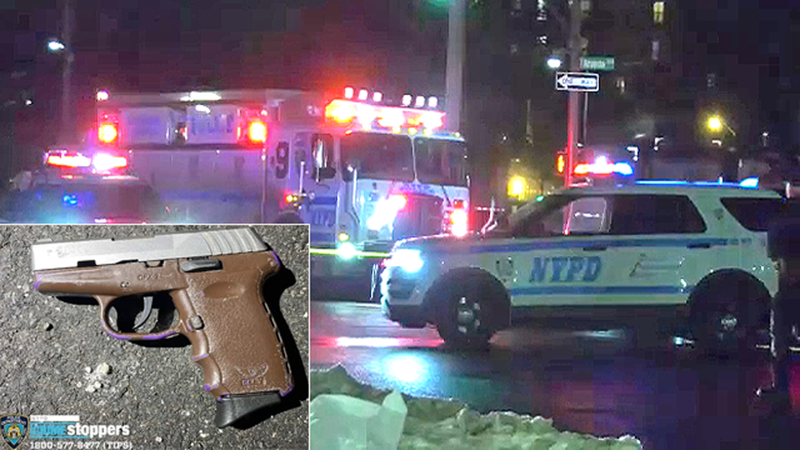 ARVERNE, Queens (WABC) -- Two men are under arrest after an off-duty NYPD police officer was shot and wounded during an attempted carjacking as he drove to work in Queens on Tuesday night.

The 22-year-old rookie was shot at the intersection of Beach Channel Drive and Beach 62nd Street at around 10:20 p.m.

Two men tapped on his window of his personal vehicle with a gun. The officer got out, and one of the men fired several shots, striking him in the shoulder.

The off-duty officer returned fire as the suspects ran away.

Collie is facing four charges of attempted murder, robbery, assault, criminal possession of a weapon and reckless endangerment. Robinson is facing a charge of robbery.

The officer was rushed to Jamaica Hospital, where he was in stable condition and expected to recover.

He was expected to have surgery Wednesday and be released from the hospital sometime Thursday.

When other officers from the nearby precinct caught up with the suspects three blocks away on Beach Channel Drive, one of the suspects fired a shot at them.

The shot missed the uniformed on-duty sergeant and officer, but struck the rear bumper of their unmarked cruiser.

The two then chased down the suspects and recovered their weapon.

"These officers are being fired at and did not shoot back. Instead, they chased the suspects on foot and apprehended the two of them a short distance away without further incident, where a firearm was also recovered," said NYPD Chief of Department Kenneth Corey.

One suspect was arrested in Jan 2021 for possession of stolen property and unauthorized use of a vehicle and is currently wanted for questioning in a grand larceny.

The other has a March 2019 prior arrest for forcible touching.

The wounded off-duty officer is the sixth member of the NYPD shot so far this year.

A handgun was recovered from one of the people arrested, one of thousands flooding New York City streets, part of a so-called iron pipeline extending down the East Coast.

"The police department is well past standing at podiums telling people there are too many illegal guns on the street and far too many people carrying them ready to pull the trigger," Police Commissioner Keechant Sewell said.

Mayor Adams says it's time state lawmakers tweaked bail reform to allow judges to consider a defendant's level of danger to the community.

He also wants judge's decision making explained, on the record.

The off-duty officer's shooting happened just hours before the NYPD held a funeral for the second police officer killed in Harlem last month - and on the same day hundreds turned out at St. Patrick's Cathedral for that officer's wake.

A wake is being held for Officer Wilbert Mora at St. Patrick's Cathedral in Midtown, after his body began the journey to his final resting place. CeFaan Kim has more.