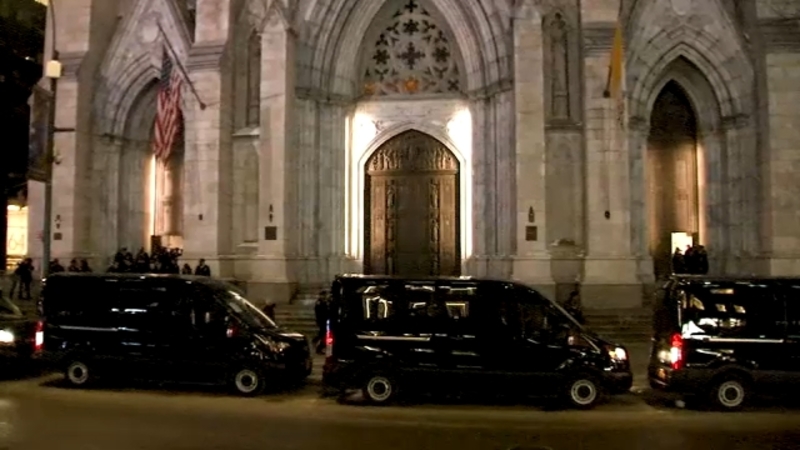 A wake was held for Officer Wilbert Mora in Midtown Manhattan, after his body began the journey to his final resting place -- but not before a grateful city showed up to say goodbye and thank you.

"Just sorrow," said Patricia Schneider, who showed up to pay her respects. "Just sorrow. A young life. That's a life that never should, he should've lived to be an old man. And who knows what he would've been, and the other officer."

The emotionally spent family of Officer Mora emerged from St. Patrick's, piled into PBA vans and drove off with one night to go, before the say good bye, forever.

Mora's funeral will be held at the cathedral Wednesday morning, followed by a burial in Woodside, Queens.

ABC7 New York will be streaming the funeral service Wednesday beginning at 10 a.m. on our new live 24/7 Streaming Channel

Mora was fatally shot along with his partner, Officer Jason Rivera, while responding to a domestic violence call in Harlem last month.

Darla Miles has more on how the NYPD organizes and plans funerals for fallen officers.

Hundreds of city leaders, first responders and members of the public were on hand to pay their respects to Officer Mora, who is being remembered as a hero in life - and death.

Among the visitors at Saint Patrick's Tuesday was Captain Joseph Badali of the Los Angeles County Sheriff's Department. He and seven other deputies flew 3,000 miles to be here. Their tan uniforms blended right into the ocean of blue.

"When they see how far we've come from Los Angeles, they extend their appreciation for us for being here as well, and it's just a great honor to be here," Bidali said. "We're all one family in law enforcement, even though there's 700,000 cops in our country, one loss is far too many."

In a final act of heroism and at his request, the 27-year-old officer's organs were donated to save the lives of others.

And so, complete strangers turned out to his wake to show their appreciation.

"Majority of your officers today are young," one mourner said. "You look at them, and I'm saddened because you hope you don't have to see this again."

First, there was a private viewing for Mora's family, followed by a sea of blue and a sea of sorrow as fellow officers filed in to pay their respects.

"It's devastating," Schneider said. "I cried all last week, and I'll be crying all this week."

It was a similar scene last week for the wake and funeral for Officer Rivera, with a police presence already in place before dawn outside the cathedral.

Rivera was just 22 years old and had only joined the force last year. He just got married in October.

His widow Dominique delivered a moving eulogy for her husband, which recounted their last day together. They had a fight that morning about him using his work phone when they were together, but theirs was a love story that began in elementary school.

"Today I'm still in this nightmare that I wish I never had, full of rage and anger, hurt, sad, and torn," she said. "Although I gained thousands of blue brothers and sisters, I'm the loneliest without you."

"Today we salute police officer Jason Rivera for the last time," he said. "His journey by our side has ended. He takes another path."
EMBED More News Videos