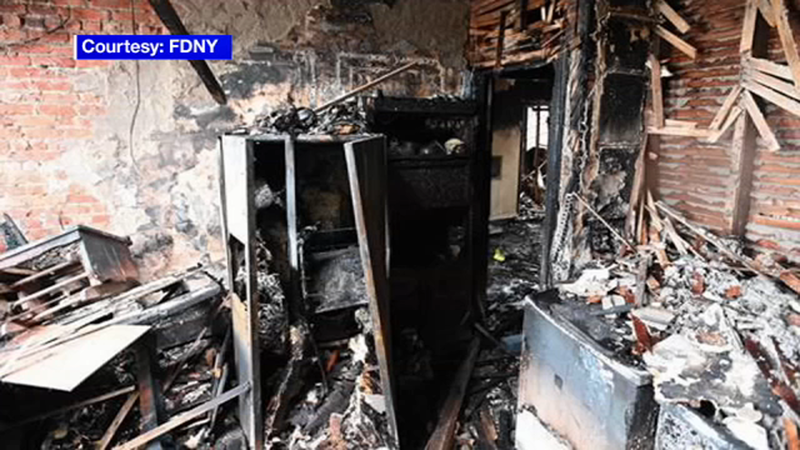 JACKSON HEIGHTS, Queens (WABC) -- More than 200 residents were displaced by a massive eight-alarm fire that tore through an apartment building in Queens Tuesday, and the FDNY is pointing to a pair of missteps that it says allowed the blaze to spread.

The fierce flames injured more than a dozen people as the fire quickly spread through the cockloft of the building on 90th Street and 34th Avenue in Jackson Heights.

FDNY Commissioner Daniel Nigro said an apartment door was left open at the fire location, reiterating that residents fleeing a fire should always close the door behind them.

"The door was open," Nigro asid. "The occupant fled, left the door open. We've stressed over the years the seriousness of that if you do unfortunately have a fire in your home or apartment, how important it is to close that door. The fire (traveled) out to the hallway, the units were unable to make a quick advance."

Additionally, Nigro said there was a 10-minute delay in calling the fire department, which allowed the flames to spread further. He said residents smelled smoke, but no one immediately called 911.

He said 10 minutes passed before the FDNY was called, "which in the world of fighting fires is an eternity."

It took more than 12 hours to place the fire under control, and firefighters remained on the scene Wednesday.

The fire is not suspicious, but the cause remains under investigation. Conditions inside the building are currently not safe for fire marshals to investigate.

"I was always wary about it because it looked rickety," one resident told Eyewitness News. "That thought completely left my mind, because it was life or death. It was do or die time. The corridor was out, we had no other options. It was that or we die."

A similar situation with a door left open allowed a large fire to spread in the Bronx back in December of 2017, one that ended up killing 13 people.

Monday marks three years since that tragic fire in the Bronx.

It was caused by a child playing with the stove, and that family escaped. But fire officials determined the open door was a crucial reason for the destruction and deaths.

Thankfully, everyone in the Jackson Heights fire was able to escape. Still, 21 people were injured, including 16 firefighters.

A GoFundMe page has been set up for the 89th Street Tenants Association to help those who have been displaced.