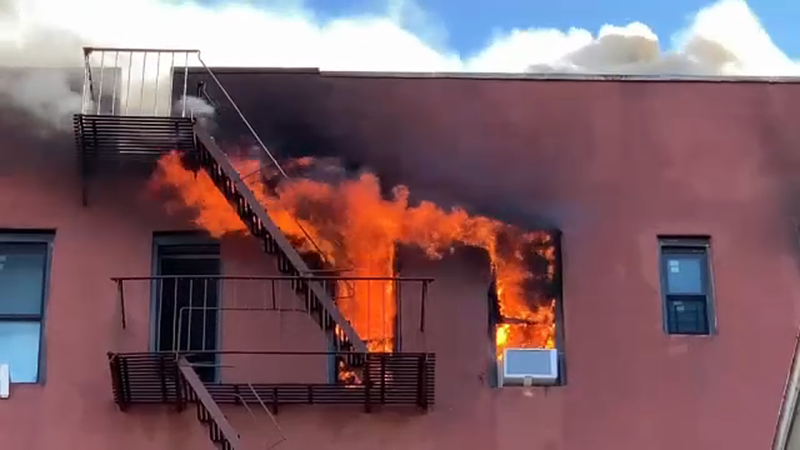 The fire broke out as four-alarm blaze on the top floor of the six-story building on 34th Avenue in Jackson Heights around 1 p.m. and quickly spread into the cockloft.

Officials say the FDNY will be at the scene through the night and the next few days.

"When the units arrived, the door of apartment was open, there was an advanced fire," FDNY Commissioner Daniel Nigro said. "The first units in were trying to make their advance, three of the members were burned. Thankfully the burns were not serious, although they have been taken to the hospital."

"Everybody was panicking, all you see is the smoke," resident Edwin Martinez said. "When you came out of the building, you couldn't see anything. it was just all gray."

The Red Cross set up a place in a nearby courtyard for the hundreds of residents, many of them children, who had to scramble to escape the fire and smoke inside.

"I got scared, because everything went black," resident Kimberly Singhi said. "I grabbed my mom, I grabbed my dog and the pets we have, and we just ran out."

Firefighters have spent most of the afternoon and evening battling the blaze, with 130 units and more than 350 firefighters and EMS on scene. They were initially on the roof but pulled back fearing a collapse.

"Intermittently we have used interior streams, exterior streams," Nigro said. "Very difficult for our members. Very taxing. We are still operating here, we will be here for some time. NYPD is here, Red Cross will be here. Salvation Army. There will be many, many families that will be needing a place to stay tonight, so they are set up in schools and other facilities to care for those folks."

Fire officials said the spread of the fire was due to a door being open.

"The door was open," Nigro said. "The occupant fled, left the door open. We've stressed over the years the seriousness of that if you do unfortunately have a fire in your home or apartment, how important it is to close that door. The fire out to the hallway, the units were unable to make a quick advance. What we see here is now a 7th alarm, possibly could have been avoided."

FDNY officials say the building has 150 apartments and approximately 90 families, including 240 residents, have been displaced due to the fire.

In total, 21 people were injured, including 16 firefighters and five residents.

Two of those firefighters suffered non-life threatening burns and were taken to Cornell Burn Center. Of the five residents, four refused medical attention and one was taken to a nearby hospital.

The cause of the fire is not yet known, but officials say it was not weather related.