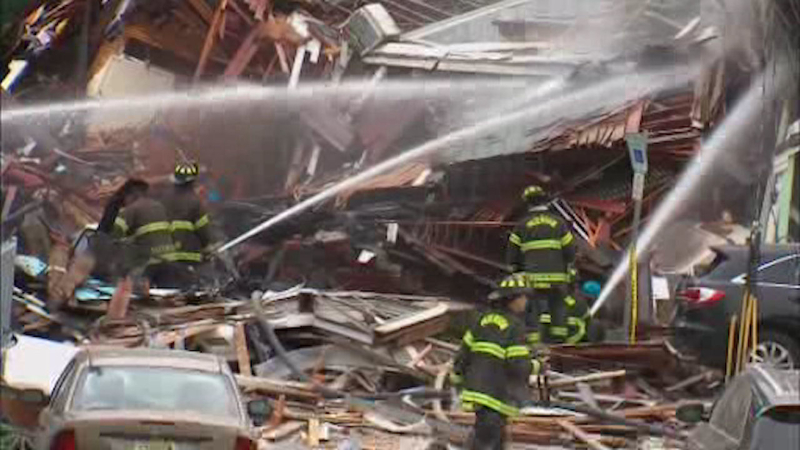 PATERSON, New Jersey (WABC) -- The destruction from the explosion in Paterson Tuesday is unmistakable, a block ravaged by smoke, flames and debris.

Much of the neighborhood was covered in rubble, with 15 homes damaged, three of which were leveled or will be razed.

The rest are being inspected to determine the extent of the damage. But for residents and those who work in the area, it was a terrifying ordeal. The first emergency calls were prompted by an intense smell of gas.

"We called 911," shop owner Nikola Dogum said. "The fire trucks came. About a half an hour later, we heard a big explosion."

Amazingly, no one was seriously injured in the blast. Emergency crews and neighbors had been going door to door to get people out before the explosion happened.

"I came out, went back in my house, got my dogs," resident Rafael Munoz said. "And five minutes later, I turn around, heard the explosion and saw something flying."

The kids were already in school, but many families were still home getting ready for the day when the door knocks came to evacuate.

"I was trying to get my brother up," resident Miller Rios said. "Then we heard the explosion."

Rios has other family members who also live on the block and will be out of their homes for a while, while inspectors try to make sure the structures are safe. Inspectors checked the stores along Main Street to make sure they're sound.

The blast took out a number of cars, including ones that belong to Munoz and Rios.

But what's not overlooked by most is that the explosion came just as they were making their way to safety.