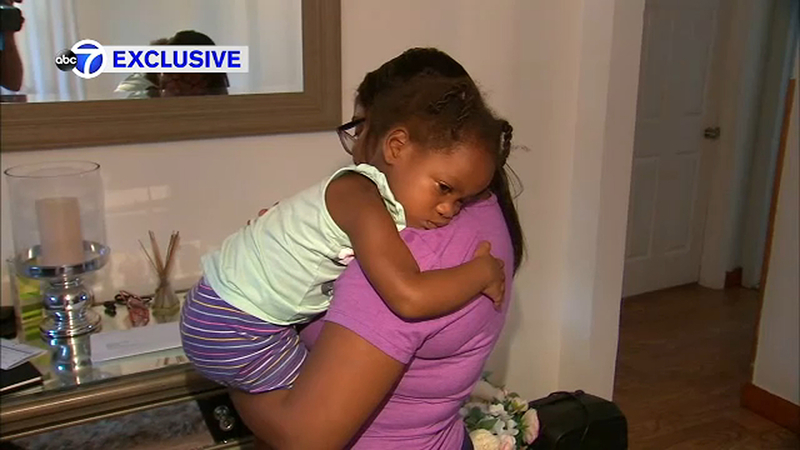 PATERSON, New Jersey (WABC) -- A toddler was revived after being found unconscious in a pool in New Jersey.

Now, in an Eyewitness News exclusive, her parents and the first responders who rushed to the house are sharing the harrowing details of her rescue.

The parents found their 2-year-old daughter Liz unconscious earlier this month in her backyard pool in Paterson, which sent her mother into a panic.

"We look at the baby, she is not breathing and we panic," said the child's stepfather Alvaro Flores. "She screams, she says call 911, call 911."

Liz had been wearing a floaty but somehow ended up underwater. It all happened in just a few short moments.

"She was floating in the pool," said her mother, Lisselotte Lopez.

The family frantically called 911 and the operator gave instructions for CPR.

The little girl's body was placed on the floor and two firefighters who are also EMTs rushed in to help. They had been on another call but were rerouted by the quick-thinking 911 dispatcher to answer the call for a 2-year-old in a medical emergency.

"It seemed like an eternity, but when we think about it they acted very fast," said Alvaro.

"I got her on her side, gave her a couple of back slaps and then she threw up water," said Paterson firefighter Francisco Peralta. "So then I immediately wanted to clear her airways so I suctioned."

Police and fire units first revived and then escorted Liz and family to the hospital, where she spent six days recovering.

But her family says the quick work of the 911 dispatcher, police and fire personnel prevented an unthinkable tragedy.

"Everybody held their composure, did what we were trained to do and what a great outcome," said Paterson firefighter Lou Dearani.