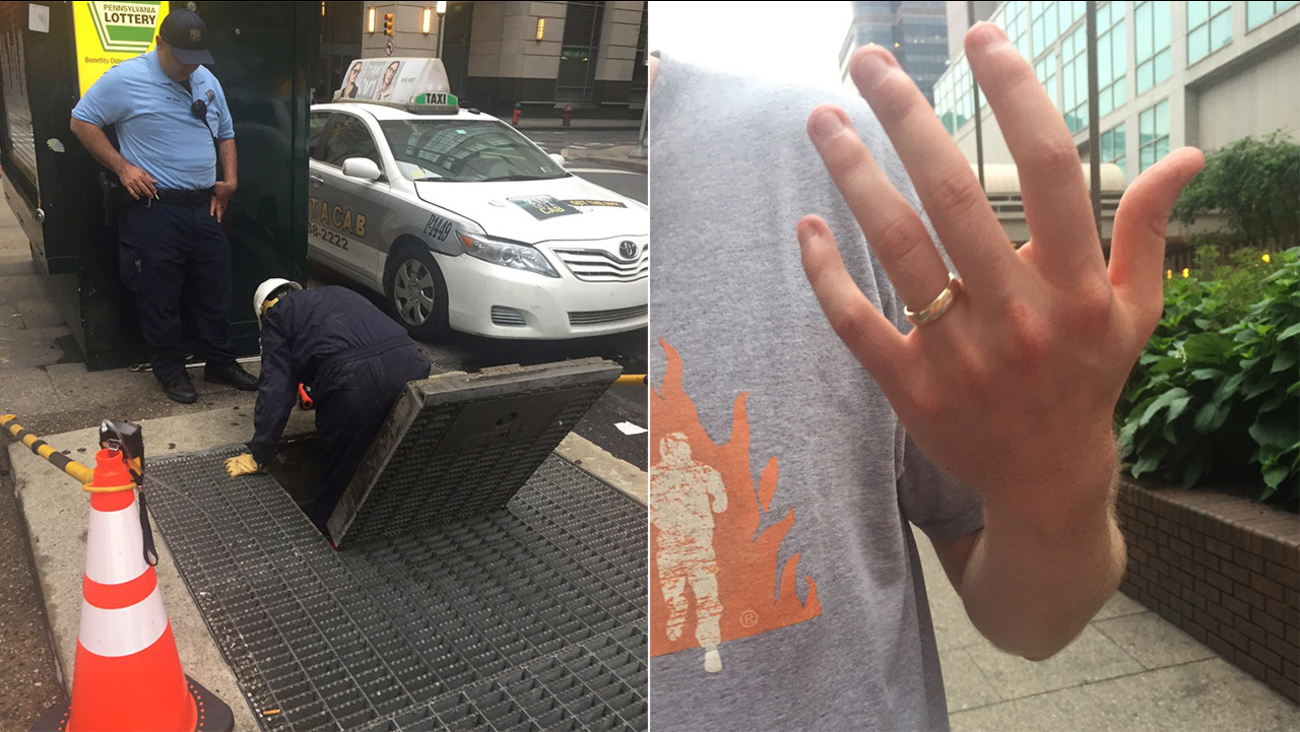 PHILADELPHIA -- The first thing on Steve Brown's to-do list this week was to take his wedding ring to the jewelers to be resized. It's a precaution so he and his wife won't have to ever relive the anxious, upsetting moments of this past weekend.

When Steve and Erin got married just a year and half ago, the groom chose to wear his grandfather's wedding ring as his own.

"This ring was originally my grandfather's and it is engraved with my grandparents' initials and wedding date. It is not worth any money, but it means the world to me since both of my grandparents are now deceased and it is a token of my fond memories of growing up with them," Steve said.

The couple, who lives in Plymouth Meeting, was walking in Center City Philadelphia Friday night when that important ring slipped off of Steve's finger, rolled along the sidewalk, and fell into a sidewalk grate in front of the Marriott hotel on Market Street between 12th and 13th. 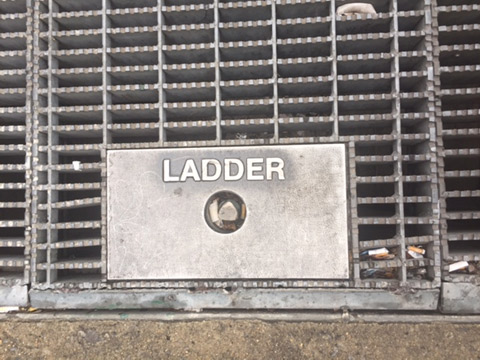 The entrance to the grate

Steve said the grate was approximately 15' deep and 30' long, so it was "nearly impossible to see a tiny ring among all the garbage and the cigarette butts from that height." Erin, who tweeted a play-by-play of their adventure to come, called it a "lovely layer of trash." 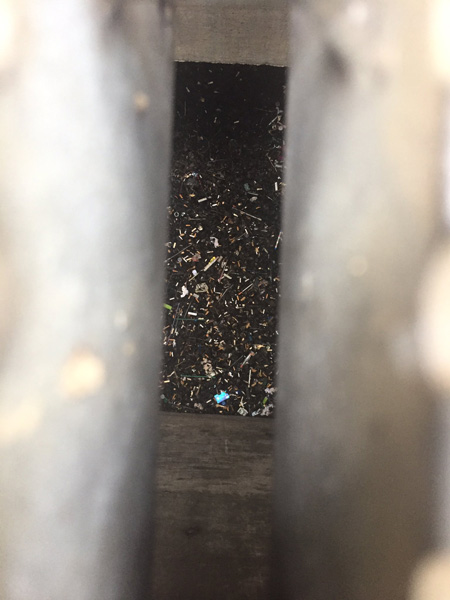 View from the top of the grate

"I was obviously distraught about losing this ring, but since it was the middle of the night there was no way for me to get help or try to recover it," Steve said.

They did try to contact several different city departments the next day, but none were opened.

Erin said they were told they had to wait until Monday morning when City Hall reopened. Deciding that doing nothing was not an option, the couple made their way to Home Depot. In what some might mistake for an episode of 'MacGyver,' the Browns created a makeshift fishing pole out of wooden rods, duct tape, and clothes hangers. 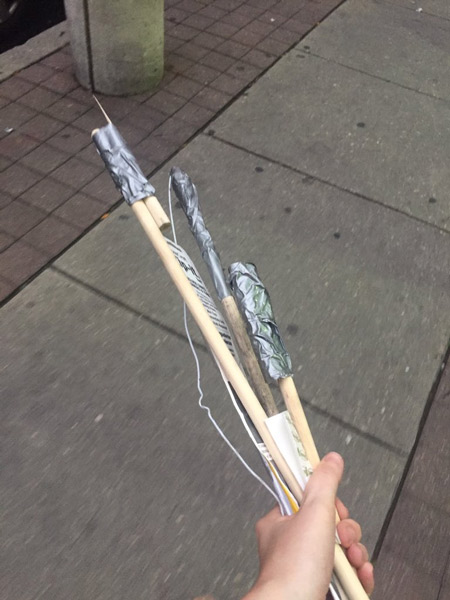 "We spent nearly two hours lying on our stomachs with our faces on the grate looking for the ring, and we finally saw a ring lying among the trash," Steve said.

Steve said it took another 30 minutes to get the ring on their one-of-a-kind hook, but when they were finally able to pull it out of the grate, they realized - it was the wrong ring!

"We were so disappointed because we truly thought that we had it," Steve said.

The sight of seeing two people looking down at a city grate with a duct-taped faux fishing pole was enough to make even the busiest passerby stop in their tracks.

Erin said, during their quest for the ring, strangers came up to them to see what was happening and to offer help - including tourists from Chicago, cab drivers, the homeless, and a bachelor party.

"Some people even laid down on the grate to help us look even though they were wearing nice clothes!" Steve said, adding, "One man politely asked us if he could sit quietly over on the side to watch and pray for us since he 'knew that we would get it back.'"

As the daylight was dimming, so too were the hopes of the Browns of ever getting their special ring back. Their luck, however, was about to change when Philadelphia Police Officer Danny Leone walked by.

"I stopped him to explain the situation and ask him if there was anything he could do. He said he would make some calls and finally was able to get in touch with someone from PECO who said that they would send a service person out to try to open the grate," Steve said.

Brian Naughton soon made his appearance in the mix, pulling up to the scene in his PECO truck. Erin called Naughton their "knight in shining armor."

Naughton put on protective clothing, used his tools to open the grate, and made his way down underneath the streets of Center City.

"We all laid on top of the grate to help him look since it was getting dark and he had a flashlight," Steve said. 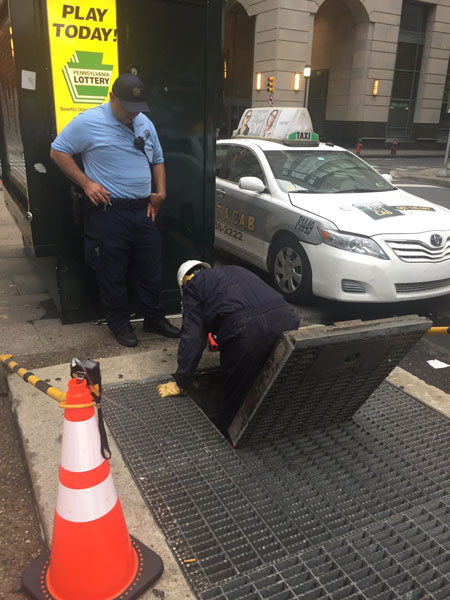 There were a number of false alarms, when the light would reflect off an item that resembled a ring, but turned out to be a piece of plastic or something else. Then, after an hour of searching, and what the Browns said felt like an eternity, it seemed Naughton's flashlight finally came across their precious possession. Erin yelled that he found it.

"He leaned down, picked it up, and sent it back up through the grate with our hook since he was nervous that he would drop the ring as he climbed back out," Steve said.

Almost a full day without it, Steve had the ring back in his hands. He checked the engraving to make sure it was the right one this time and sure enough, there were his grandparents' initials. His ring was back home. 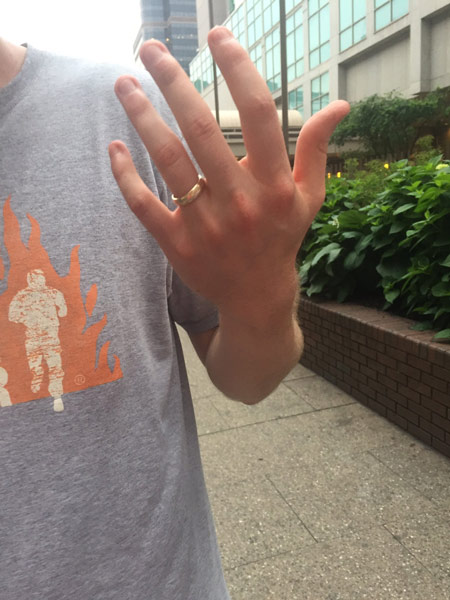 The ring is back on the Steve's finger

"We all cheered- the cab drivers, the tourists on the street, and Philly cops who had come just to watch how this was going to end," Erin said.

Though the Browns left their nerve-wracking ordeal with what they were looking for - the lost wedding ring - they also found something else - unwavering pride for the city of Philadelphia.

"This story obviously makes me happy because I got my irreplaceable ring back, but it makes me even happier to know how many people took time and effort out of their day to help us. The police officer and the service man from PECO truly went above and beyond, and it was even inspiring just to see how many complete strangers came over to offer their support and assistance," Steve said.

"[It] could have been an incredibly sad and disappointing day, but instead it became a shining example of generosity, perseverance, and what it means to live in the City of Brotherly Love. Thank you PECO , Philadelphia police, and all the strangers for their support!" Erin said.

The couple themselves know what it means to help others. Erin works for the State of Pennsylvania as a Counselor Supervisor in Norristown. Steve is an Outreach Coordinator for the Community Learning Center on North Broad Street.

"Philadelphia truly is a wonderful place where its citizens take care of each other, and I've never been prouder than to call this city my home," Steve said.