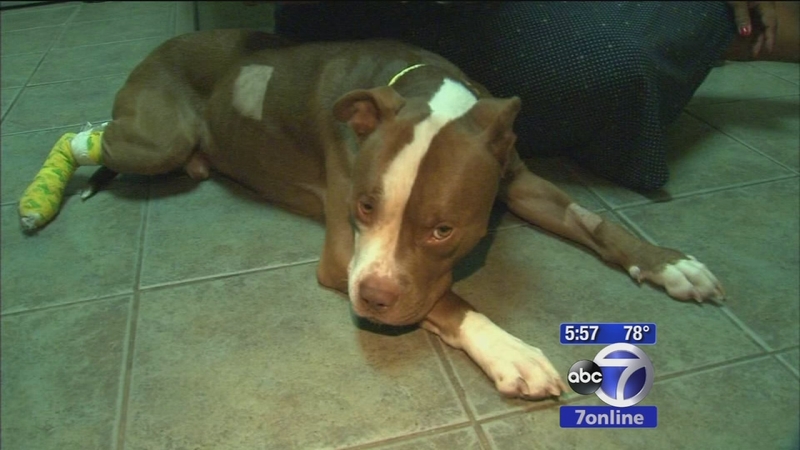 Pitbull reunited with owner after accident

The pit bull who came to be known as Meeker was reunited with his owner, Oliver Rivera, for the first time in two days on Thursday.

On Wednesday evening, just before 7 p.m., Meeker/Wookie was found on Meeker Street bleeding from his mouth. Investigators are trying to determine if Wookie jumped off the Brooklyn-Queens Expressway or if he was thrown off.

Rivera said about an hour earlier, a friend was taking Wookie for a walk near the intersection of Bayard Street and Graham Avenue in the Greenpoint section of Brooklyn. Then he wiggled out of his harness and ran off -- apparently running one block to the BQE.

Even though Wookie and Oliver have been reunited, he can't go home yet. He's in ICU and needs to remain under observation.

Gregory Kost witnessed the dog fall. "I saw a dog falling toward the concrete," he said on Wednesday.

Another eyewitness told the veterinarian who treated Meeker that he saw the dog thrown from a car by someone.

"A Good Samaritan actually saw (the dog falling) onto the road below," said Dr. Brett Levitzke.

The witnesses raced the dog over to the Veterinary Emergency Referral Group, which is taking care of him with help from a group called Positive Tails, a philanthropic group that pays for animal victims of abuse. Wookie had no signs of previous abuse, and remarkably survived the 30-foot drop.

Meeker is alive mainly because of the people who brought him in, his vet said. "If he hadn't found him right away, (he'd) be dead right now," said Levitzke.

Rivera is grateful to Positive Tails for helping take care of Wookie and for paying for his medical bills. He filed a police report that night before he heard late Wednesday that his best friend had been found.

"I thought he was a goner," said Rivera. "It's good to have him back."