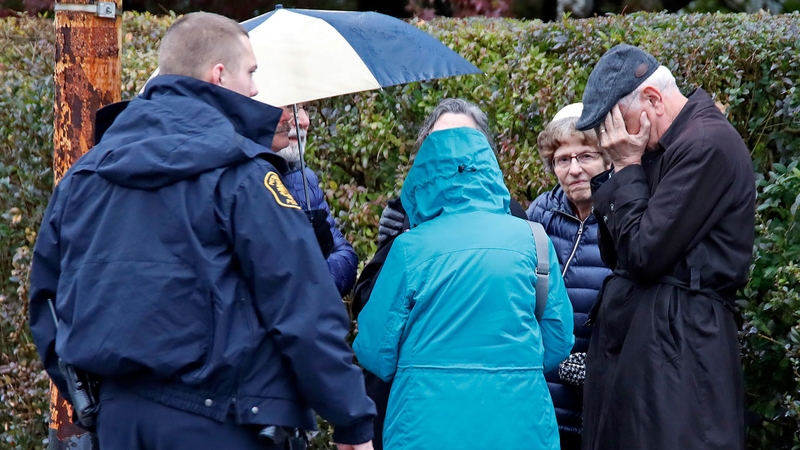 PITTSBURGH, Pennsylvania (WABC) -- A gunman who's believed to have spewed anti-Semitic slurs and rhetoric on social media barged into a baby-naming ceremony at a Pittsburgh synagogue on Saturday and opened fire, killing 11 people in one of the deadliest attacks on Jews in U.S. history.

The 20-minute attack at Tree of Life Congregation in the Squirrel Hill neighborhood left at least six others wounded, including four police officers who dashed to the scene, authorities said.

The suspect, Robert Bowers, traded gunfire with police and was shot several times. Bowers is in fair condition at a hospital.

The U.S. Attorney for the Western District of Pennsylvania announced that Bowers is facing 29 charges:

"Please know that justice in this case will be swift and it will be severe," Scott Brady, the chief federal prosecutor in western Pennsylvania, said at a late-afternoon news conference, characterizing the slaughter as a "terrible and unspeakable act of hate."

Six people were injured, including four officers whose injuries are non-life-threatening. Three of those officers were shot.

The Tree of Life is in the vicinity of Shady Avenue and Wilkins Avenue in the Squirrel Hill neighborhood, a relatively affluent area about 10 minutes from downtown Pittsburgh.

Rabbi Alvin Berkun, the synagogue's rabbi emeritus, told ABC News he had heard that the suspect at one point was in his office on the third floor of the synagogue. He had stayed home from services because his wife was sick and that he has not heard from friends who were in the building.

Berkun said Tree of Life hosts three different religious groups that hold three services on Saturday mornings and guessed that there were approximately 75 people in the building at the time of the shooting.

President Donald Trump tweeted that he is watching the events unfold.

Before boarding Air Force One, Trump addressed the shooting in Pittsburgh and called the "hate in our country" a "terrible thing." He said the results would have been better if the synagogue had an armed guard and also called for strengthening the death penalty.

WTAE-TV reported that this synagogue often has security, but during the attack, it did not. The synagogue's security director is a former FBI agent.

"I was heartbroken and appalled by the murderous attack on a Pittsburgh synagogue today," Netanyahu said in a video message posted on Twitter

The NYPD and the LAPD are deploying extra teams to synagogues and Jewish locations throughout New York City and Los Angeles.