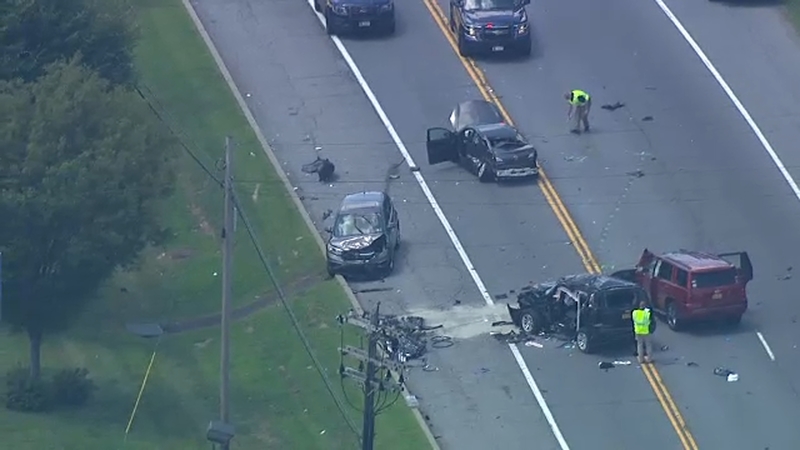 Officials said police started pursuing a black Chevy Tahoe, driven by 26-year-old Willie Cuyler, from Fort Lauderdale, around 10:55 a.m. as a traffic stop on I-87 near the Newburgh exit.

The pursued vehicle appeared to stop at the Newburgh tolls, police said, but then took off and exited onto Route 17 driving erratically at high speeds. Cuyler allegedly led police on an 18-mile pursuit.

"This vehicle cut into my lane doing over 100 miles per hour head-on," motorist John Thompson said.

Police said the pursued vehicle then violently crashed head-on into a Mazda, which pushed into the path of a Honda CRV around 11:10 a.m. near NY-300 and NY-17K in Newburgh. Cuyler's car then spun around and struck another Chevy Tahoe.

"There was two, three state troopers came out of the cars," eyewitness Theo Argiropoulos said. "Guns were drawn aiming on the black car, telling everybody 'Put your hands where I can see them.'"

The drivers of the Honda CRV and the other Chevy Tahoe were taken to the hospital with non-life-threatening injuries.

All four people in the pursued vehicle were injured and transported to area hospitals. Two passengers, 25-year-old Farrell Kam and 26-year-old Darius Henry, were seriously injured.

Cuyler's car was being pulled over as police believed the occupants were associated with the "Felony Lane Gang," police said.

The group was reportedly responsible for a numerous smash and grab robberies and fraudulent ATM withdrawals associated with identity theft throughout the East Coast.

Cuyler and Kam remain in police custody. The investigation is continuing and charges are pending arraignment when medically feasible.