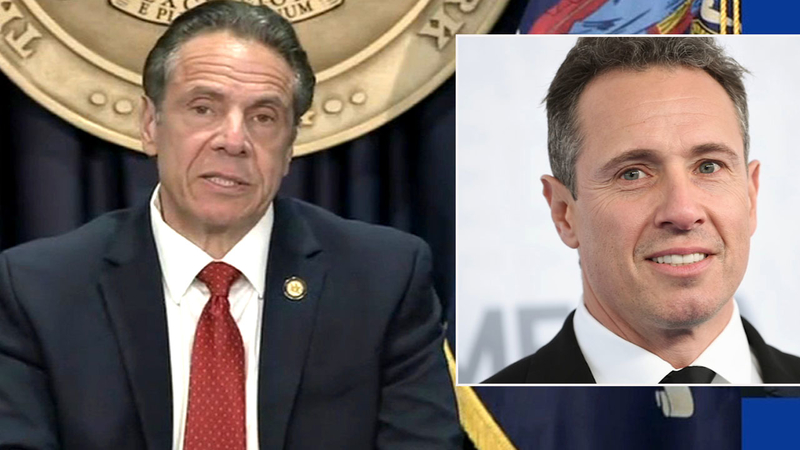 NEW YORK (WABC) -- A new controversy is surrounding New York Governor Andrew Cuomo, this time over COVID testing at the beginning of the pandemic.

According to reports, the governor used state resources to prioritize testing for his family and associates, including his brother, CNN anchorman Chris Cuomo.

Reports say a top state official was sent in a state trooper's car to Chris Cuomo's home in Southampton to collect a sample last March.

That sample was then driven more than six hours by a state trooper to the Wadsworth state testing lab in Albany.

Dave Evans has the latest in the growing scandal surrounding Governor Andrew Cuomo.

Others who were allegedly given special treatment include Cuomo's mother, a sister, and top officials, including MTA chairman Pat Foye, Port Authority Executive Director Rick Cotton, and state legislators and their families.

The Times Union and the New York Times report that the samples from Cuomo's family members were pushed to the front of the line, during the time when the state was working to contain the initial outbreak in New Rochelle.

The governor says despite the many controversies around him, he is still focused and getting his job done. He had a message for those who say he now has too many distractions to govern effectively.

"I say it's clearly not true, because the reality is the exact opposite," Cuomo said. "We're opening new vaccination centers all over the state. We've increased capacity dramatically. You've seen me doing that when negotiating the budget as we speak, and we've been doing that, we're making good progress on that. So they were just wrong."

Dave Evans has the latest on the Cuomo investigation.

"We should avoid insincere efforts to rewrite the past. In the early days of this pandemic, when there was a heavy emphasis on contact tracing, we were absolutely going above and beyond to get people tested - including in some instances going to people's homes, and door-to-door in places like New Rochelle - to take samples from those believed to have been exposed to COVID in order to identify cases and prevent additional ones. Among those we assisted were members of the general public, including legislators, reporters, state workers and their families who feared they had contracted the virus and had the capability to further spread it."

"We generally do not get involved in the medical decisions of our employees. However, it is not surprising that in the earliest days of a once-in-a-century global pandemic, when Chris was showing symptoms and was concerned about possible spread, he turned to anyone he could for advice and assistance, as any human being would."

A representative for the governor said that the use of state troopers to drive samples was common last year this time as they were working on contact tracing and containing the spread.

"There was nothing extraordinary about the use of State Police assets to transfer samples, as that was the case for virtually all collections sent to Wadsworth early on," the New York State Police said in a statement. "During the first weeks of the pandemic, troopers transported thousands of samples from around the state to Wadsworth for testing."

The New York state Attorney General's Office released a statement in response to the reports.

"The recent reports alleging there was preferential treatment given for COVID-19 testing are troubling. While we do not have jurisdiction to investigate this matter, it's imperative that JCOPE look into it immediately."