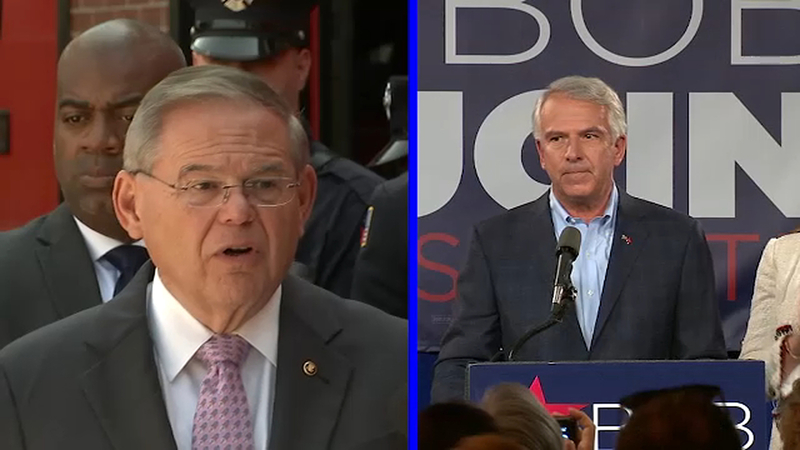 NEW JERSEY (WABC) -- With the midterm elections three weeks away, one of the most closely watched Senate races is in New Jersey, where Democratic incumbent Bob Menendez is several points ahead in the polls.

But Republican challenger Bob Hugin is mounting an aggressive campaign that includes millions in TV ads, including the newest that launched Monday.

"Sex with underage prostitutes in the Dominican Republic..it's right here in this shocking FBI affidavit," the ad says.

"There's a good part of his advertising that is absolutely a fraud and false," said Menendez, who is livid about the new ad and calls it a blatant lie.

In southern New Jersey Tuesday, Hugin defended the ad. His campaign said nobody is accusing Menendez of anything, just stating the facts.

"These are multiple underage women who have made allegations corroborated by the FBI in sworn testimony," Hugin said. "This is not something that's been out there before."

But that affidavit has been out there. It's based on an anonymous claim from six years ago.

The FBI never charged Menendez with any kind of prostitution, but a bribery trial ended when the jury couldn't reach a verdict.

Those women in the Dominican Republic refuted old claims, and the person who made the original complaint said Tuesday: "It is pretty despicable of Menendez's opponent to bring up stuff that is completely untrue."

Yet Hugin refused to back down. "Let's be clear, these are FBI corroborated allegations," he said.

A recent poll showed a dead heat in the race, but a more recent poll gives Menendez a 10 point lead, 49 to 39 percent. Whether he likes it or not, the race is becoming a referendum on the ethics of Menendez.

"Anyone who thinks about my record for the people of New Jersey, they're gonna say he did a hell of a job for New Jersey."

We spoke to both campaigns Tuesday afternoon.

The Hugin campaign maintains these are new allegations that have not come out before.

The Menendez campaign says that is simply not true, that it all stems from an old claim back in 2012.