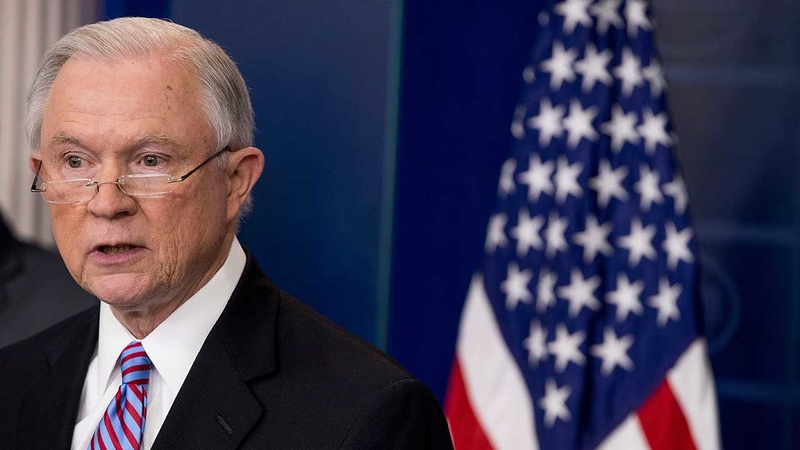 Top cop on DOJ's 'soft on crime' claim: 'My blood began to boil'

NEW YORK (WABC) -- New York City Mayor Bill de Blasio and NYPD Commissioner James O'Neill are lashing out after the the Trump administration intensified its threats to crack down on so-called sanctuary cities and claimed that New York City is "soft on crime."

Attorney General Jeff Sessions sent letters Friday to nine jurisdictions, warning the department would withhold coveted law enforcement grant money unless they document cooperation. In a statement, the Justice Department said the recipients of its letters are "crumbling under the weight of illegal immigration and violent crime."

In regards to New York City in particular, the statement read, "New York City continues to see gang murder after gang murder, the predictable consequence of the city's 'soft on crime' stance."

It drew an immediate response from de Blasio, who called the rhetoric "nothing new" and "grandstanding."

"If you believe this statement is accurate, come to New York City, look our police officers in the eye and tell them you believe they are soft on crime," he said. "See how that feels, and see how the people of New York City will feel about that. This absurd statement needs to be renounced immediately...and I want to express my thanks to the men and women of the NYPD for what they have achieved in making this the safest big city in America."

O'Neill was also quick to slam the comments.

"I'd like to think of myself as a pretty calm and measured person...but when I read that statement by DOJ this afternoon, my blood began to boil," he said. "To say we're soft on crime is absolutely ludicrous."

O'Neill issued a statement earlier, pointing out the steady decline in overall crime throughout the city.

"The Justice Department's release this afternoon stating that New York City is somehow 'soft on crime' and continues to see 'gang murder after gang murder' demonstrates a willful disregard for the facts," he said. "2016 saw the fewest shootings ever in New York City history since record keeping began. Year to date, the city is down an additional 17 percent from last year's record low. Since 1993, murder has decreased 82 percent, shootings have decreased 81 percent, and overall crime has decreased 76 percent. These are the facts. Additionally, over the past year, the NYPD has hosted dozens of other police departments from across the world to share our best practices of precision policing, which focuses on the most serious criminals."

The letters went to officials in California and in other major cities including Chicago, Philadelphia and New Orleans, all places the Justice Department's inspector general has identified as limiting the information local law enforcement can provide to federal immigration authorities about those in their custody.

Sessions has increasingly warned that the administration will punish communities that refuse to cooperate with efforts to find and deport immigrants in the country illegally.

After a raid led to the arrests of 11 MS-13 gang members in California's Bay Area "city officials seemed more concerned with reassuring illegal immigrants that the raid was unrelated to immigration than with warning other MS-13 members that they were next," the department said.

The federal law in question says state and local governments may not prohibit police or sheriffs from sharing information about a person's immigration status with federal authorities. Friday's letters warn officials they must provide proof from an attorney that they are following the law or risk losing thousands of dollars in federal grant money that police agencies use to pay for anything from body cameras to bulletproof vests.

The money could be withheld in the future, or terminated, if they fail to show proof, wrote Alan R. Hanson, acting head of the Office of Justice Programs, which administers the grant program, which is the leading source of federal justice funding to state and local communities.

They were highlighted in a May 2016 report by the Justice Department's inspector general that found they have policies or rules that interfere with information-sharing among local law enforcement and immigration agents.

The Orleans Parish Sheriff's Office, for example, has a policy to decline all requests by Immigration and Customs Enforcement to keep a suspected deportable immigrant in its custody long enough for immigration authorities to arrest the person unless that person is charged with certain violent crimes, according to the report.

It also pointed to a Milwaukee County rule that immigration detention requests be honored only if the person has been convicted of one felony or two misdemeanors, has been charged with domestic violence or drunken driving, is a gang member or is on a terrorist watch list, among other constraints.

The Obama administration warned cities after the report's release that they could miss out on grant money if they did not comply with the law, but it never actually withheld funds.

The grants in question are based on population and support an array of programs, technology and equipment for local law enforcement agencies, which can use the money at their discretion.