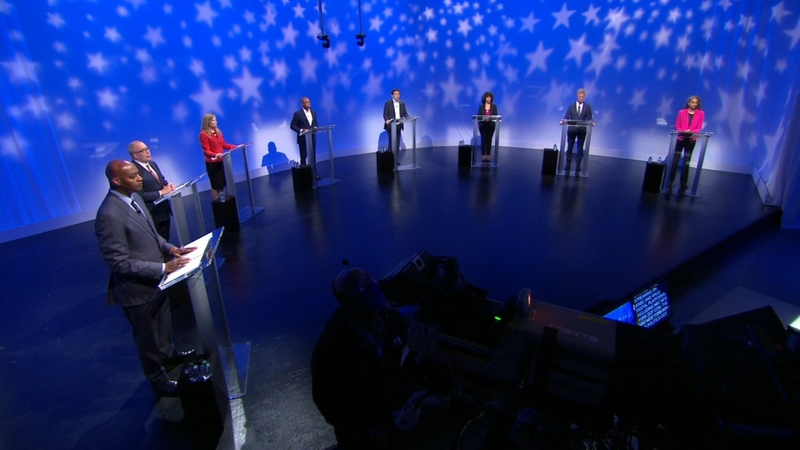 NEW YORK CITY (WABC) -- As primary day fast approaches, the Democratic candidates vying to be New York City's next mayor were back on the campaign trail Thursday, one day after a contentious final debate with a heavy emphasis on rising crime.

All the top candidates hit the streets, trying to spin their debate performances into personal wins and capitalize on the pitfalls of their opponents.
EMBED More News Videos

As primary day fast approaches, the Democratic candidates vying to be New York City's next mayor were back on the campaign trail Thursday, one day after a contentious final debate with a heavy emphasis on rising crime.

Brooklyn Borough President Eric Adams, who is leading in the polls, picked up the endorsement of former New York Governor David Paterson.

Adams, who claimed he went virtually untouched in the debate, looks increasingly confident.

"I'm like Daniel," he said. "Every time they throw me into the lion's den, the lions come out licking my paws and saying, 'Keep on moving, Eric, keep on moving.'"

For one time frontrunner Andrew Yang, it was a day of cleanup after many said his debate comments about the homeless and mentally ill were insensitive.

"Yes, mentally ill people have rights," he said during the debate. "But you know who else have rights? We do. The people and families of the city."

"I am so deeply saddened and disappointed about the way Andrew Yang talked about homelessness and mental health," she said.

But Yang, campaigning in the Bronx with actor John Leguizamo, made no apologies and doubled down, saying we have to do something about homelessness and the mentally ill.

"We've all seen versions of this on the streets of New York," he said. "Where the person is in need but is not in a position where they're going to raise their hand and say bring me to a shelter, bring me to a hospital."

Former Sanitation Commissioner Kathryn Garcia, who has surged to second in the polls, campaigned at a subway stop, saying that politicians need to quit playing a blame game with the degrading situation on public transportation.

"New Yorkers do not care about egos or who's more to blame," she said. "They want to know they can get on the subway and be safe."

Garcia also got some good news from Yang's campaign, when Leguizamo revealed who else he voted for, after Yang.

She was joined by her cousin, actor Clark Gregg, who played Agent Phil Coulson in the "Avengers" franchise and on ABC's "Agents of SHIELD."

"I fight fictional crime," he said. "This is a person who can fight real crime."

Adams, though, ripped Garcia for having an actor who plays a cop on TV campaigning with her.

"Are we choosing next police commissioner from 'CSI Miami'?" he said.