WABC
By Anthony Johnson
BERGEN COUNTY, New Jersey (WABC) -- Early voting is underway in New Jersey ahead of the November 3 general election, which will be conducted mostly by mail and without in-person voting with few exceptions, as President Donald Trump faces former Vice President Joe Biden in a contentious battle that is dividing the nation.

The votes are already being counted, though the tallies won't reveal until election night. It's a monumental undertaking.

"We're taking it one day at a time," Bergen County Board of Elections Chair Jamie Sheehan-Willis said. "Right now, things seem to be running smoothly. If there is an issue, we will address it at that time, and we're confident we will get this done."

It takes a coach like Sheehan-Willis and an army of poll workers, seniors, and college students all part of the counting process run with no partisan bickering.

"The board is made of three Democrats and three Republicans, and we work hand in hand," Bergen Board of Elections Commissioner Richard Miller said. "We work with each other. We don't work against each other."

Some 300,000 ballots have been submitted so far, with many more expected. And the counting machines are up to the task.

"Because it's a two page ballot, we're going to a million sheets of paper," said Mike Dvorak, with Election Systems & Software. "So we've grown roughly tenfold."

"So far, this works," voter Gloria Etta said. "I feel like there's plenty of boxes within the county, all throughout New Jersey, that allows everyone to get out and vote."

Some 600,000 ballots were mailed to Bergen County residents.

Remember, if you go to the polls next Tuesday, you can either drop off a mail-in ballot or fill out a provisional one if the mail-in got lost -- which gets counted last.

Going into the voting booth is only reserved for a few.

"The only people that can vote in the machines in the polling locations are those who are not physically capable of filling out a ballot with a pen," Bergen County Clerk John Hogan said.

The rules are designed to prevent crowds of people gathering inside because of concerns over COVID-19. Still, some voters relish the tactile feeling of pressing a button to record their choice.

"I'm being told that I can't go to my polling place and cast my vote as usual," voter Frank Iagrotteria said. "I'm really not a fan of that particular law that came out."

All active registered voters in New Jersey should have automatically received their ballots in the mail, at the address where the voter is registered.

If you haven't received your vote by mail ballot, please contact your county clerk.

In addition to the president, voters will be electing a U.S. senator and their U.S. House representative. New Jersey also has three ballot questions: legalizing recreational marijuana, delaying the legislative redistricting if the Census is delayed, and giving a property tax break for veterans who served during peacetime. 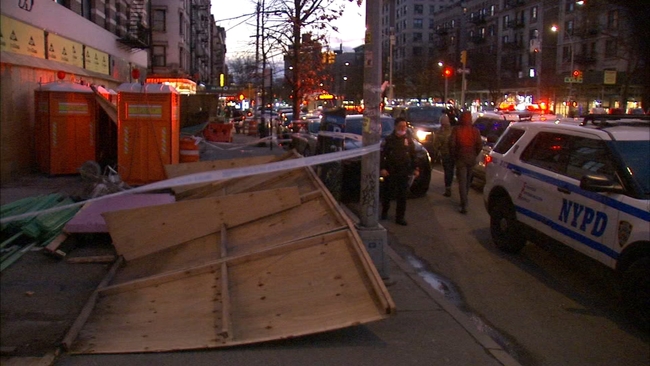 Family says they were kicked off flight over toddler without mask
WHO says it's 'unrealistic' to think COVID will end soon
Women discover they're biological siblings while working in restaurant
Workers damage family's new fridge while delivering it
FDNY responds to partial roof collapse at Best Buy storage unit
Show More
Stimulus check updates: What to expect from Senate this week
The Countdown: Cuomo under fire over sexual harassment scandal
Manhunt expanded for MIT grad student in Yale killing
Fire rips through residential building in NJ, dozens displaced
Here's when the US will see a lot more COVID-19 vaccine doses
More TOP STORIES News