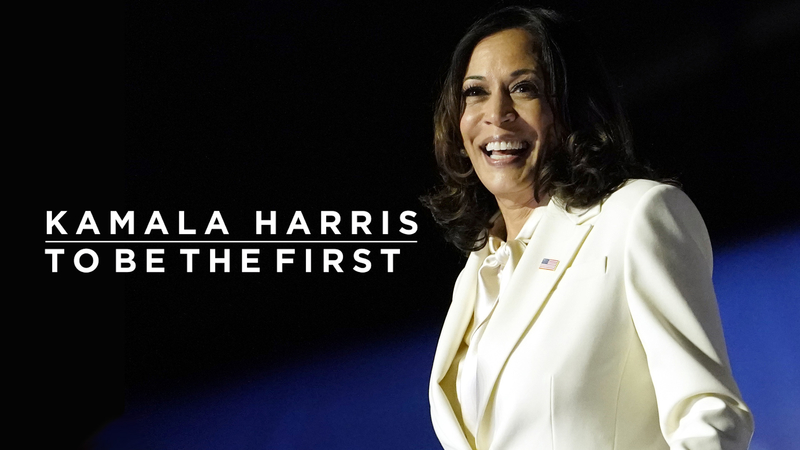 Long before entering politics, Harris' early childhood in Berkeley gave her an opportunity to be an agent of change when she was bused across town to be part of the second class to integrate her public school, Thousand Oaks Elementary School.

Harris first ran for public office as San Francisco District Attorney in 2002, defeating her former boss to become the first African-American woman to serve as district attorney in California. Harris is biracial, identifying as both Black and Indian.

RELATED: How to pronounce Kamala Harris' name and what it means

"She's been a mentor, but she's more like a mother," says San Francisco Mayor London Breed. "I think the name 'Momala' is so perfect for her because she provides you with advice and support, but she also tries to find out what is going on with you and are you taking care of yourself."

Harris' next stop on her road to the White House would be at the California state capitol as the first African American, first woman and first Asian American to serve as California attorney general. From there, she filled the Senate seat long held by Barbara Boxer and became the second Black woman elected to the U.S. Senate.

With her groundbreaking vice presidential win, Harris is inspiring another generation, especially young people from Oakland, where she was born.

"It's really an inspiration knowing that she was born in Oakland, and like she was around the same streets," explains 14-year-old Anevay Cruz. "it's really inspiring for the community."

"She's representing, you know, all the young Black and Indian girls," says Harris' former campaign manager Debbie Mesloh. "She's representing so many women that look at her on that debate stage and say, 'Wow, there she is.'"

In the weeks leading up to the election, ABC7 spoke with those who surrounded Harris throughout her journey to answer the question: Who is Kamala Harris?

"Kamala Harris: To Be The First," a new ABC7 documentary, details Harris' journey from her childhood in the Bay Area to her formative years at Howard University and then her rise to political prominence in San Francisco, the state of California, and the Senate.

Childhood friends, colleagues, mentors and young people she's inspired discuss Harris' rise to the vice presidency and her impact for generations to come.

You can watch "Kamala Harris: To Be The First" in the player above or through your favorite streaming service.

"I feel seen and heard today." Co-California State Director of South Asians for Biden breaks down in tears after he announces Sen. Kamala Harris as his running mate.