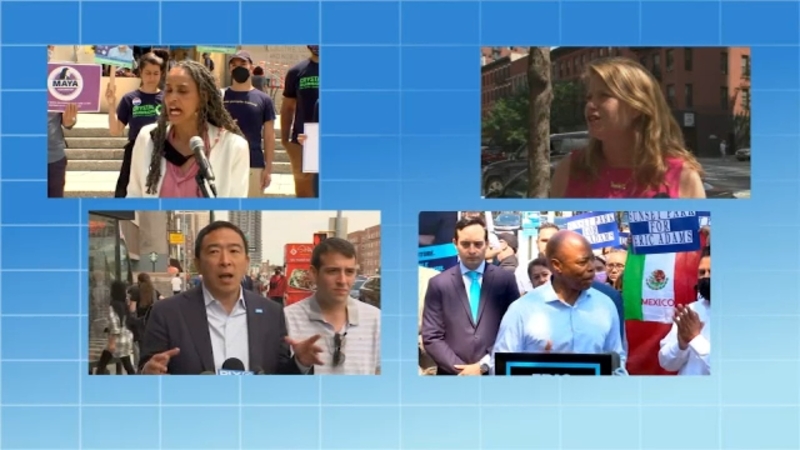 NEW YORK CITY (WABC) -- Primary day in the race to be New York City's next mayor is just one week away, and the candidates were back on the trail Tuesday as the race continues to heat up.

Early voting ended its fourth day with more than 64,000 New Yorkers having already cast their ballot.

Former presidential candidate Andrew Yang greeted subway and bus riders at the busy Union Turnpike station in Kew Gardens Tuesday, reiterating that crime and public safety are the leading issues in his campaign.

"I'm the mayor whose going to delivery real public safety for us and our families," he said. "I was endorsed by the police captains just yesterday, (Brooklyn Borough President and former police officer) Eric Adams' old union, I might add. The officers who know Eric best have decided I'm the best choice to help make New Yorkers safe."

The significance was not lost on anyone, as transit crime has skyrocketed in recent months.

Yang, once the frontrunner, is now running fourth in the polls and is doing everything he can to regain that momentum he had in recent months.

And speaking of momentum, former Sanitation Commissioner Kathryn Garcia is trying to energize her supports after the latest poll put her in second place and within striking distance of Adams.

He was in Sunset Park Tuesday, speaking to Mexican American New Yorkers about ICE and immigration.

"We're going to really assure that we're a sanctuary city, where you won't have to worry about receiving access to governmental services because ICE is partnering with our agencies to prevent you to do so," he said. "That's not going to happen here in our city. We're going to make sure you get the services that you deserve. We're going to use IDNYC to sign you up automatically for those services that you deserve. You shouldn't have to walk into a government building and have improper translators. This is not an English only speaking city."

Adams currently leads the field, up 7 points on Garcia, who is trying to portray this as a two-person race in hopes of drawing support from other candidates who are trailing.

"One of things I've learned over the past few months is that when politicians start to feel threatened, they start throwing mud," she said. "That's not who I am. I'm about showing up, rolling up my sleeves, and getting the work done."

She took her campaign to the Upper East Side, where the turnout is traditionally high.
EMBED More News Videos

"I'm going to the places where people vote," she said. "That's incredibly important in a primary. I looked at where those hotspots were, and that's where I'm going to make my case."

Attorney and activist Maya Wiley is currently in third place in the polls, trailing Garcia by 2 points and leading Yang by the same margin.