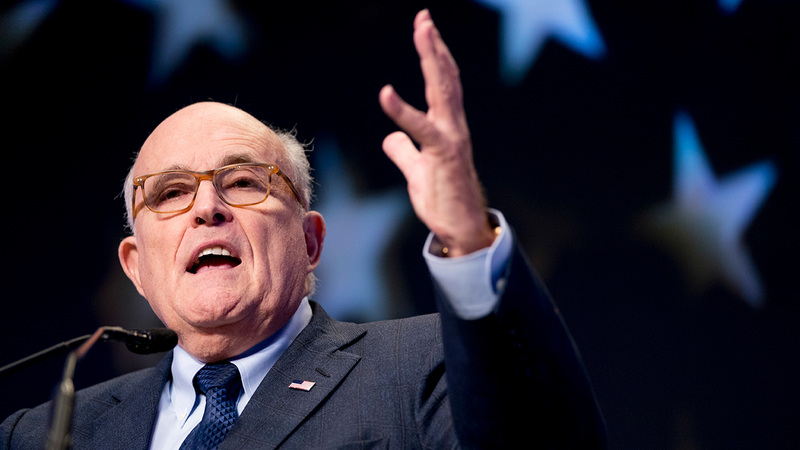 It is the latest strategy from the president's legal team after the release of secretly recorded audio tapes between Trump and his one-time personal lawyer, Michael Cohen.

Trump's legal team went on the attack against Cohen, saying he violated attorney-client privilege by releasing the taped conversation of him and Trump about payments to a former Playboy model.

Giuliani told ABC News on Saturday that Cohen violated attorney-client privilege by releasing a tape of him discussing with Trump, his client at the time, payments for former Playboy model Karen McDougal's story alleging an affair with Trump.

"We have complained to them that he's violated the attorney-client privilege, publicly and privately," Giuliani said.

But Davis said the president's team "forfeited all confidentiality" when Giuliani talked publicly last week about the tape.

"Mr. Giuliani seems to be confused," Davis said. "He expressly waived attorney-client privilege last week and repeatedly and inaccurately - as proven by the tape - talked and talked about the recording, forfeiting all confidentiality."

On "This Week" Sunday, ABC Chief Legal Analyst Dan Abrams told Co-Anchor Martha Raddatz that Giuliani has "waived attorney-client privilege" in regard to the tape.

The comments about whether Cohen's release of the tape violated attorney-client privilege comes as sources tell ABC News that Cohen claims Trump knew in advance about a 2016 Trump Tower meeting between Trump campaign members and Russians who were expected to provide dirt on rival candidate Hillary Clinton. Trump has denied knowing in advance about the meeting.

Raddatz asked Abrams and Chris Christie, a former US prosecutor and New Jersey governor who is an ABC News contributor, for their thoughts on the Trump team's legal strategy in regard to Cohen.

She noted that Giuliani called Cohen an "honest, honorable lawyer" on "This Week" in May. "Now he's saying (Cohen) has been lying for years, and President Trump is bringing up that Cohen said that Don Jr. was an honest broker just last year. What are they trying to do here?"

"Look, they're obviously trying to undermine Cohen's credibility," Abrams said. "And there is a real concern about Michael Cohen's credibility. I mean, he is under serious investigation for a wide variety of crimes ... The FBI raided his office not to get information on Donald Trump but because there was evidence of a possible crime and crimes by Michael Cohen."

Christie said that if Cohen wants to make a deal with prosecutors, he may be hurting himself by making claims publicly about Trump.

"It is not in Michael Cohen's best interests when he does not have a deal yet," Christie said. As a prosecutor, Christie said that before he would make a deal with Cohen "there would be a long come-to-Jesus meeting with (him) and with his attorneys about from this moment forward, if you have a deal, keep your mouth shut, because it doesn't help the prosecution to have all this information out there."

On Sunday, Giuliani the president may be open to an interview with special counsel Robert Mueller even if it involves some questions about alleged obstruction of justice in the federal investigation into Russia interference in the 2016 election.

Giuliani said negotiations continue with Mueller's office regarding the conditions for an interview, which Trump's legal team spelled out in a proposal this month.

Giuliani said Trump's team wants an interview basically limited to questions involving alleged collusion between the Trump campaign and Russia in the 2016 election, arguing that no "legal basis" exists for Trump to be questioned about obstruction. But Giuliani also told CBS' "Face the Nation" that Trump might be willing to address obstruction in some form.

"There is a sort of area of questioning and a group of restrictions on it that we could live with, I think," Giuliani said. "We have an outstanding offer to them. They haven't responded in about a week to 10 days. I don't hold that against them."

Giuliani said Trump could make a decision this week or next on whether to sit for an interview.

Trump has repeatedly insisted that he's willing to be interviewed by Mueller's team. But Giuliani has said Trump's legal team is less enthusiastic because Mueller and his staff might seek to believe witnesses who contradict Trump's account, such as former FBI Director James Comey.

Trump has given varying reasons for firing Comey in May 2017.

"We don't see the legal basis for a president obstructing by merely taking an action in firing somebody that he had every right to fire. And about 10 good reasons to fire. So we don't just acknowledge though the basis for that," Giuliani said. "But, you know, we might consider a few questions in that area also."

(ABC News and the Associated Press contributed to this report)