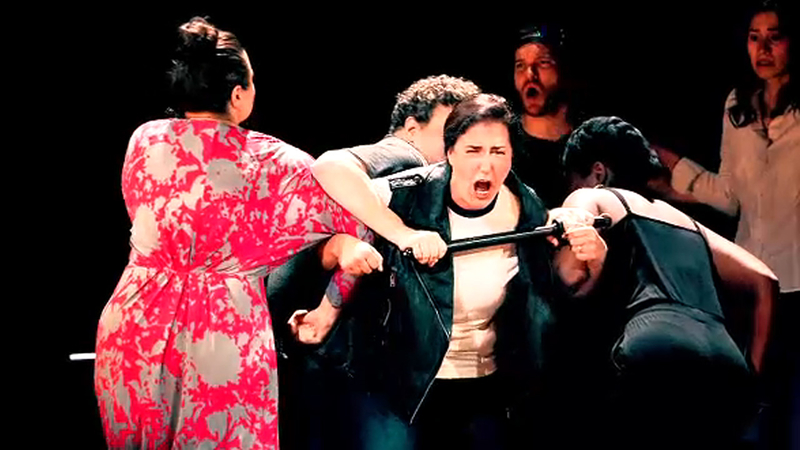 UPPER WEST SIDE, Manhattan (WABC) -- Five decades years after the Stonewall riots, history is being made at a theater some 50 blocks north of where the uprising took place.

The New York City Opera is taking the story of what happened that night and re-imagining it for the stage.

A pivotal moment of the gay rights movement is recalled in song, and "Stonewall" is history remembered but also history made by New York City.

The story of events half a century ago is told through the lives of five main characters, including a teacher fired for being gay and a lesbian harassed on the subway.

"You get to see their personal story," said Lisa Chavez, who plays Maggie. "How they go to this point, why they're going to the bar that evening."

The stories are fictional yet firmly grounded in reality.

"I just made up these characters based on my own personal experience being a gay man living in the city, living in the West Village for several decades," writer Mark Campbell said. "And just remembering the people I've loved and wanted to honor."

For those involved who weren't alive in 1969 to witness what happened, working on the opera has underlined the significance of the Stonewall.
"I'm very fortunate to be able to call myself a married gay man," composer Iain Bell said. "Were it not for the bravery and courage of those people on that night, and all our allies, I don't think i'd be able to say that."

The opera ends with the characters asking each other an important question: "What do we do now? Where do we go from here?"

They are questions that linger 50 years later.

"We still have a long way to go to really feel the sense of acceptance and equality and appreciation that we fully deserve as a community," said Jordan Weatherston Pitts, who plays Renata.