In one photo, the queen is pictured with two grandchildren and all five of her great-grandchildren. In the tradition of royal portraiture, she is holding 11-month-old Princess Charlotte in her arms. Charlotte's 2-year-old brother, Prince George, stands at the queen's knees. Between them is Savannah, 5, whose father Peter Phillips is the queen's oldest grandson. Off to the right is her 3-year-old sister Isla. Off to the left, holding the queen's handbag, is her 2-year-old great-granddaughter Mia Tindall. In the back row are the queen's two youngest grandchildren, siblings Lady Louise (12) and James, Viscount Severn (8), whose parents are the Earl and Countess of Wessex.

The photos, taken by famed photographer Annie Leibovitz, were released Wednesday by Buckingham Palace. In another of the photos, the queen posed with other cute members of her household: her dogs. The queen was captured with Willow, Vulcan, Candy and Holly on the steps at the rear of the East Terrace and East Garden as they wandered the private grounds of Windsor Castle in England. 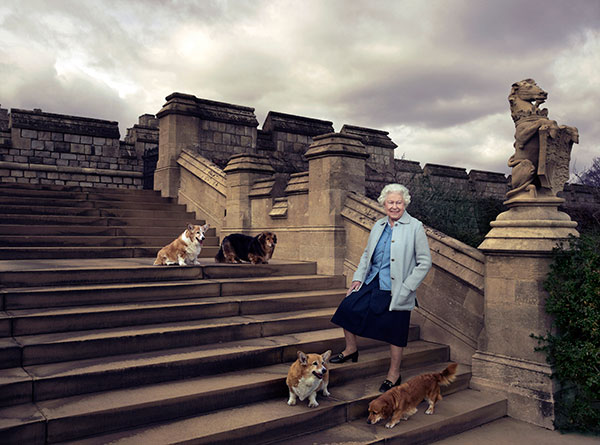 The queen also sat with her only daughter, Anne, Princess Royal, in the White Drawing Room at Windsor Castle. 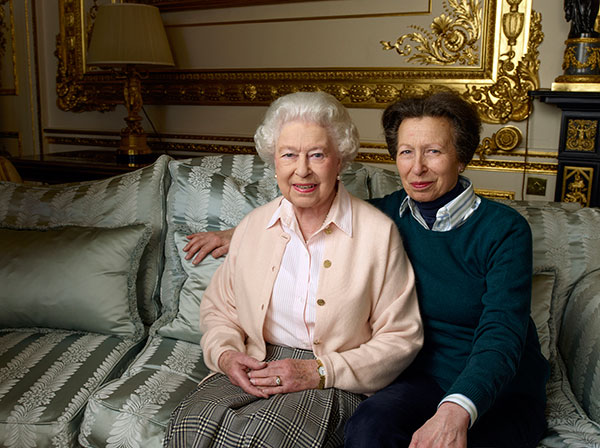 Queen Elizabeth II sits with her daughter Anne, the Princess Royal, in the White Drawing Room at Windsor Castle in England.

Leibovitz's pictures aren't the only ones taken for the occasion. In a different photo taken for commemorative stamps, Prince George is joined by three other generations of the royal family. The 2-year-old prince stands on a stack of foam blocks while father Prince William, grandfather Prince Charles and great-grandmother the queen sit around him, all smiles.

For the stamp photo, the Windsor family posed for photographer Ranald Mackechnie last August in the White Drawing Room at Buckingham Palace, according to Good Morning America.

The photo has been divided into four stamps, each featuring the face of one of the royals, which are now on sale by the Royal Mail.

The queen and her husband, Prince Philip, visited the Royal Mail to celebrate its 500th anniversary Wednesday, where she was serenaded for her birthday. Per British tradition, the queen's birthday is celebrated both on the actual day, April 21, as well as in June.

ROYAL FAMILY PHOTOS: William and Kate through the years