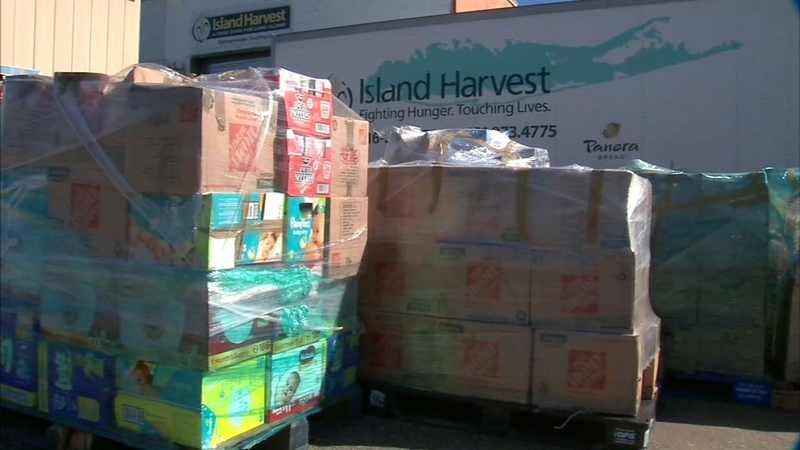 The island is in desperate need of supplies and support, and Island Harvest is willing to help.

Long Island's largest hunger relief organization received nearly 450,000 pounds of food, water and supplies over the past week, and large amounts of it are headed to Puerto Rico.

"A constant stream of food coming in and coming out," Vice President of Operations and Food Sourcing Migdalia Otero.

But once it arrives, will it reach those who need it the most?

Heartbreaking footage out of Vieques on Thursday showed people reaching their relatives for the first time, because of a charity that brought in satellite phones. Other footage from the U.S. Air Force showed the devastation, and those who are now living day-to-day with literally no roof over the heads.

On Thursday, after some delay, the Trump Administration waived the shipping restrictions known as the Jones Act, which will expedite delivery of recovery supplies.

"So we are grateful that our cries for justice were heard, and that the president did the right thing and stood on the right side of history," San Juan Mayor Carmen Yulín Cruz said.

Painful pictures reflecting shipping containers sitting idle in the port of San Juan and trucks that had yet to go out will perhaps be moving out to those who need water, medicine and food the most.

"There was no truck driver availability," Otero said. "It's difficult. Not everybody drives big 53-foot trucks, and to get trucks that were working because of the devastation was pretty hard...We're like, 'No problem, bring it to us. We'll get it out.'"

Officials at Island Harvest say they have both trucks and truck drivers ready to get the goods to those who need them the most. As for the Jones Act, President Trump issued Puerto Rico a 10-day exemption. But already, some say that's not enough. Among them is Senator John McCain, who has drafted legislation to make that exemption permanent.
Report a correction or typo
Related topics:
bethpagelong islandcharityhurricane mariadonationspuerto rico
Copyright © 2022 WABC-TV. All Rights Reserved.
TOP STORIES
EMT shot in ambulance by alleged drunk patient on Staten Island
9-year-old girl killed in NYC had bed dropped on head, prosecutors say
NY high court to determine if Bronx Zoo elephant is a person
Man walks at NYU graduation after bike accident left him in coma
House passes terrorism bill after shooting in Buffalo, New York
Family learned of loved one's death watching Buffalo shooter's video
Amber Heard's sister, friend testify in Johnny Depp defamation case
Show More
Expert weighs in on when you can buy a car amid chip shortage
Drivers tackling another day of rising gas prices
No changes to NYC mandates; several NYC judges COVID positive
AccuWeather Alert: Wet start and a sunny afternoon
What is monkeypox? What to know after US confirms 1st 2022 case
More TOP STORIES News