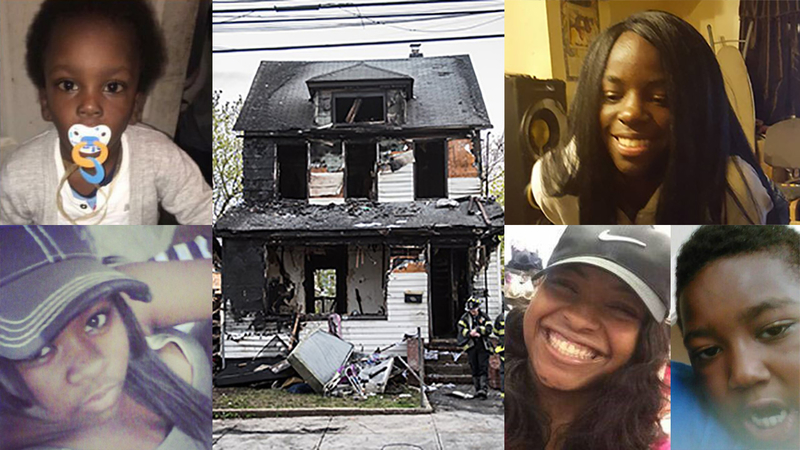 Police say the victims were 2-year-old Chayse Lipford, 10-year-old Rayshawn Matthews, 16-year-old Jada Foxworth, 17-year-old Melody Edwards, and 20-year-old Destiny Dones. Four of them are said to be members of the same extended family, while the fifth is a family friend.

A sixth person, identified by relatives as 46-year-old Maurice Matthews, was able to escape out a second-floor window and was taken to New York Hospital Center of Queens in satisfactory condition. He is reportedly Rayshawn's father and Chayse's grandfather.

Fire investigators said they have not found any working smoke detectors in the house. They are trying to determine what sparked the fire, but they say that it is not considered suspicious and is believed to have started on the first floor.

The blaze broke out in a house on 112-16 208th Street in Queens Village just after 2:30 p.m. and also spread to an adjacent home. That home was damaged, but no one was home at the time.

The three-alarm fire took hours to get under control, and the wooden frame of the house burned quickly.

The flames were so intense that the black smoke drew neighbors from their homes, and the flames could be seen by firefighters before they arrived, leading them to call in extra crews.

They struggled to reach some of the victims who were as high up as the attic, a "super-human" task for firefighters to reach people in a home engulfed by such a massive fire, FDNY Commissioner Daniel Nigro said.

They managed to bring a 2-year-old and someone else from the attic where they had been trapped, he said, but they were too late to save them.

16-year-old Jada Foxworth was doing homework along with her friend 17-year-old Melody Edwards. They both lost their lives while trying to be good students.

Melody had plans to attend SUNY Purchase after high school, but will instead be buried in her new, unused prom dress.

Investigators will closely examine a car parked in a driveway between the two houses that burned, as the fire appears to have started or spread through the car to the two adjacent homes.

Witnesses heard tires pop, which may have been mistaken for an explosion, and Nigro said the preliminary investigation indicates the fire did not start from the car.

Distraught family members and neighbors showed up to the scene, crying and asking 'why would God let this happen?'

The mother of the 2-year-old victim was away on vacation and left him in the hands of relatives.

"She's a good mother, she was always with her baby," relative Sheener Bailey Briggs said. "And she went for the first time on an airplane, the first time away from her baby and she just found out. Just pray for the family."

The fire was the deadliest in the city since March 2015, when a house fire in Brooklyn killed seven children, all siblings. That fire was touched off by a hot plate.