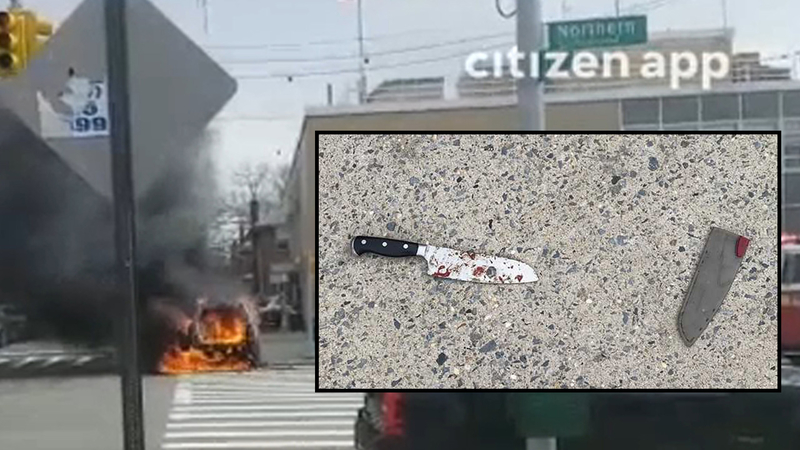 BAYSIDE, Queens (WABC) -- Police in Queens shot a man who they say approached officers with a knife after a bizarre chain of events Sunday afternoon.

Authorities say the suspect, identified as 33-year-old Davis Jarrell, first crashed his Jeep into a police cruiser outside the 111th Precinct in Bayside. He then set the cruiser and his vehicle on fire and pulled out a knife as officers approached, police said.

Video from the Citizen App showed the SUV burning out of control Sunday around 3 p.m.

Police say Jarrell crashed his Jeep, exited the vehicle, and sprayed an accelerant before lighting the police cruiser and his vehicle on fire.

Authorities believe Jarrell may be emotionally disturbed, in part because he apparently was not wearing any pants at the time of the incident.

"Somebody crashes their car and lights up a vehicle, there may be a possibility of mental issues," NYPD Chief of Patrol Rodney Harrison said. "There was a lot of cops going up and down here and then they closed this street."

Police released a picture of the knife, covered in blood. They said they are presently unsure of the source of the blood.

Jarrell is now facing 10 criminal charges, including arson and menacing officers. He has no prior arrests in New York, but he does have a record in Texas.