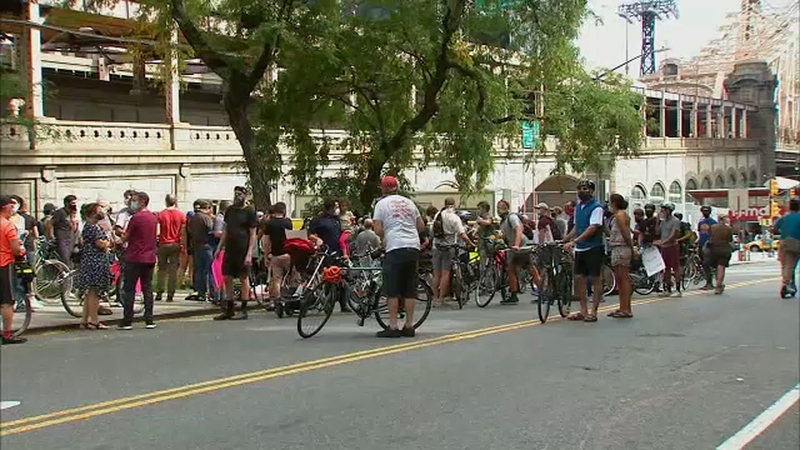 Pedestrian and cyclists call for more space on Queensboro bridge

NEW YORK (WABC) -- There are calls for more safety measures for cyclists and pedestrians on the Queensboro Bridge.

Of the 10 lanes on the Queensboro Bridge, nine are reserved for cars and trucks, while pedestrians and bicyclists share just one: the North Outer Roadway.

Officials say volumes of bicycle and pedestrian traffic on the North Outer Roadway have increased dramatically over the past few years, as the shared path is the only direct connection between Queens and Manhattan over the East River.

Due to the ongoing pandemic, many essential workers and other New Yorkers are opting into cycling instead of mass transit. Bike use on the North Outer Roadway is up 40% compared to last year, which has led to dangerous overcrowding on the narrow right of way.

According to the Department of Transportation, pedestrian use of the bridge tripled between 2007 and 2017, while bike use has quadrupled.

The New York City Department of Transportation tells Eyewitness News it thinks adding bicycle and pedestrian capacity to the bridge is a great idea - but safety upgrades to the bridge means that won't be happening for quite a while.

Local elected officials have indicated a willingness to do whatever it takes to convert the South Outer Roadway into a pedestrian-only link between Queens and Manhattan.