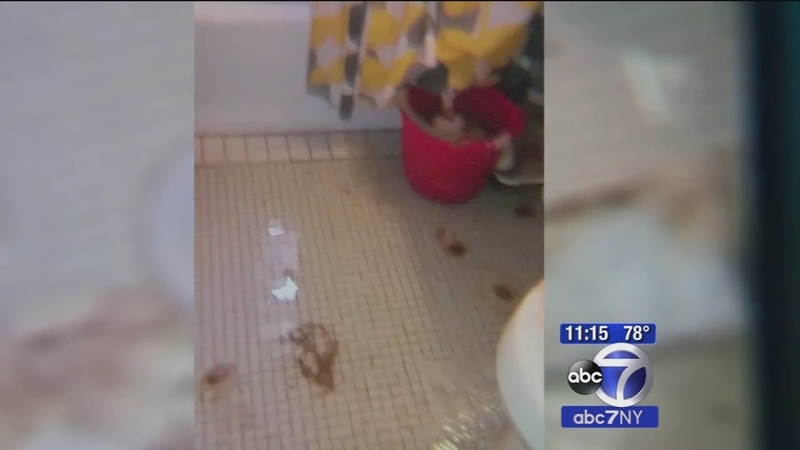 JAMAICA (WABC) -- Sewage is flowing freely in to an apartment complex in Queens.

Residents say while the sewage started Sunday night, the problems have existed for years and they haven't been fixed.

"Come in the bathroom and I notice that there's water coming up in the toilet and the tub and so before I know it's like overflowing," said Ebony Holmes, a resident.

It's a filthy problem that keeps resurfacing here inside the South Jamaica Houses, where a backed up sewer line has forced feces filled water to overflow into this apartment twice over the last year and half.

This mother of two says she first noticed the problem again late Sunday night, but when she called the city Housing Authority for help they took hours to get there and only offered a rush clean up job.

Now with close to $5,000 in damaged furniture, clothes, and home goods, Ms. Holmes is begging for answers along with New York Councilman Ruben Wills.

"I think it's a lack of accountability and passing the buck hoping that they can pass it around enough that people get tired of chasing it to find out who's really accountable," Councilman Wills said.

Eyewitness News was there as workers continued their cleanup of the raw sewage which also seeped into the buildings' basement and community center which is home to a popular children's program.

Although Ms. Holmes and her two kids are being temporarily relocated as the building gets professionally cleaned, both she and Councilman Wills are demanding a long-term solution.

"She has taken this and endured it like most people in our community when things like this happen because they continuously happen," Wills said.

"It feels real dehumanizing, I don't like it, it's unacceptable," Holmes said.

Eyewitness News reached out to the New York City Housing Authority for comment and were told a representative will be working with Ms. Holmes on a damage claim, and this building is being put on a prevention plan, which will include a quarterly sewer pipe cleaning schedule to prevent future back-ups.