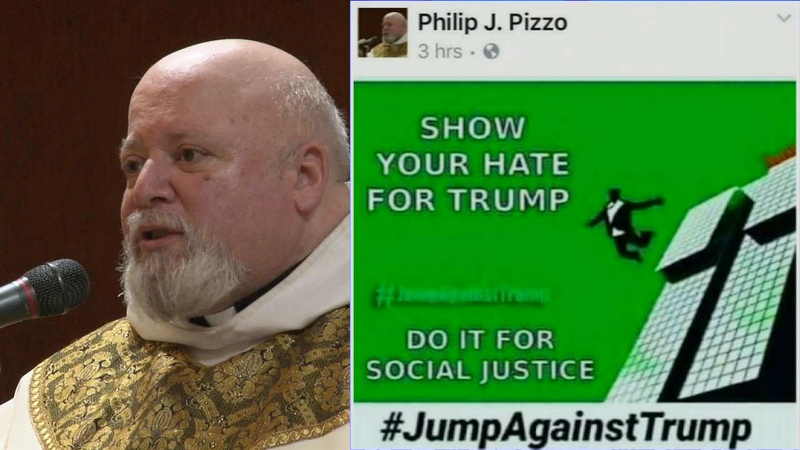 QUEENS, New York (WABC) -- A New York City priest says he was joking when he shared a photo that showed a man plummeting from a skyscraper with the slogan "show your hate for Trump."

The Rev. Philip Pizzo said the meme - which also said "do it for social justice" - was not intended to promote suicide.

The post on his personal Facebook page contained the hashtag "JumpAgainstTrump," and Pizzo says it was satire and that he regrets causing offense.

"I apologize for the hurt that I have caused over a Facebook post," he wrote. "I never intended it to get this kind of reaction and I regret posting it. I have been a priest for 40 years and my goal has always been to bring Christ to the people. I am pro-life and any reference to suicide is contrary to my beliefs, therefore, making my post completely inappropriate. Again, please accept my sincerest apology."

Rev. Pizzo is at St. Benedict Joseph Labre Roman Catholic Church in Richmond Hill. The Roman Catholic Diocese of Brooklyn said it does not reflect the church's stance and has been removed.

.@FatherPizzo regrets any offense he has caused. Suicide is a serious subject and his post does not at all represent the view of the church.

The priest previously shared a photo of former President Barack Obama with the phrase "He's not my president" and another of Hillary Clinton titled "Ugly Face" in Italian.