Some residents post signs against mosque in Bayonne, New Jersey 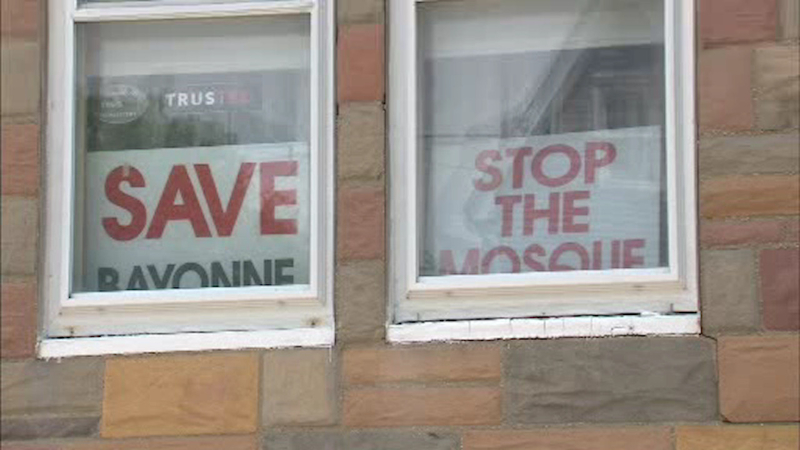 Battle over mosque in Bayonne

BAYONNE, New Jersey (WABC) -- Signs of controversy are popping up in one New Jersey community concerning building a mosque.

Those behind the signs claim that building an Islamic Community Center would be unsafe in the wake of the Orlando nightclub massacre.

Others say that argument is simply shameful.

The signs in Patricia Basille's window are pretty clear. She doesn't want a mosque and community center to be built in an abandoned warehouse in Bayonne.

She would not tell her story to Eyewitness News, but she is part of a small group in Bayonne fighting to stop the mosque.

"It is shocking to hear some of the people, but that's normal, the backlash, the international climate with what's going on in the media and what you are hearing with all of those things, so I understand their concern,"

One GOP group leader said in a statement: "In light of the Orlando terrorist attack recently committed in the name of Islam, a mosque in Bayonne would be unsafe and unwise."

"It's a just a very small few that are tarnishing the image of our town, it's a very small minority, groups, you know, I'm not concerned about that, each society has that,"

Ms. Basille, the woman who has the signs in her window, claims that on Monday a man she presumed to be Muslim, knocked on her door, threatened her and told her to take the signs down.

"We don't condone any of that; it's completely against anything we are trying to do in a peaceful environment. So if somebody did that, we want that person caught and that person brought up,"

Zoning issues will be discussed at a meeting next week.