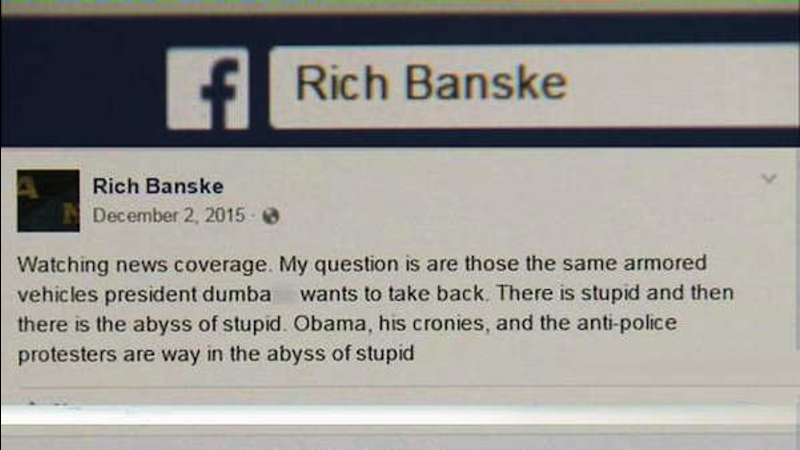 CALUMET CITY, Illinois -- After more than 24 years fighting fires in Calumet City, Illinois, Deputy Chief Rich Banske's career has gone down in flames because of some "inappropriate" posts on Facebook.

Banske, the second highest ranking fire official in Calumet City, was stripped of his position last Thursday due to crude social media comments about running over black protesters, President "dumba--" Obama and "carpet bombing" enemies of the U.S.

After being busted down on Thursday, Banske then resigned from the department on Friday, according to Fire Chief William Galgan.

"The posts were not reflective of the Calumet City Fire Department," Galgan told the I-Team. Banske's personal Facebook account listed his position with the Calumet City fire department. His inflammatory posts came to the attention of the I-Team last summer-although some dated back to more than one year ago. However, Tuesday Chief Galgan said that he hadn't been informed of the inappropriate comments by his chief deputy until last Thursday.

On Nov. 24, 2015, Banske's Facebook page included comments under his name on "Black Lives Matter" demonstrations underway in downtown Chicago: "Protest anything you want but if you interfere with my right to travel or get to my kids or my home you're gonna get run over. And I really don't care if you get hurt."

Three days later came critical remarks about "the good Rev Jackson, Fr Faker and their band of idiots..." possibly referring to noted South Side pastor Father Michael Pfleger. "Chicago gang members injure and kill more young blacks than all the police departments in the country" was posted on Banske's page.

On Dec. 16, 2015: "War is for winning. Kill them all and let God sort it out. Cruise missiles and carpet bombing are just fine with me."

Finally, on March 18 of this year, came a post in which Banske stated that "It's bad enough that I have spent a lifetime being called a racist by idiots on the left but now the idiots like Mitt Romney are calling me one too because I support Trump. Hey Mitt-go F yourself."