WABC
RICHMOND HILL, Queens (WABC) -- A 21-year-old man is charged with murder and sexual abuse in the death of a 92-year-old woman in Queens.

Maria Fuertes' body was discovered on the sidewalk near Liberty Avenue and 127th Street in Richmond Hill just after midnight Monday, and now, 21-year-old Reeaz Kahn has been arrested.

Investigators say he is the same person seen in surveillance video released Thursday in connection with the investigation, and he was taken into custody at some point overnight at a nearby homeless shelter.

WATCH: NYPD briefing on charges pending in the murder of 92-year-old Maria Fuertes

Police say Fuertes was collecting bottles and cans for recycling money when she was approached from behind, assaulted, and knocked to the ground. She was found lying there with neck and back injuries.

"There was some sort of physical contact between the two, between Mrs. Fuertes and this unknown male, that caused them both to fall to the ground, where they landed behind a parked car," a police official said. "The perpetrator and the victim were out of view for approximately four to five minutes, at which point the subject suddenly reappears and runs northbound on 127th Street. Mrs. Fuertes remains on the ground."

The victim's son, Luis Fuertes, said he wants the attacker to pay for what he did to his mother, but he is grateful that police were able to get video of the suspect.

After conducting an autopsy, the medical examiner ruled that her injuries were intentional, and that she suffered injuries to her private area.

Kahn has a prior arrest for felony assault involving another family member, after police say he slashed his father in the chest and arm with a broken coffee mug on November 26.

After he was arrested, he reportedly claimed he was angry at his mother. 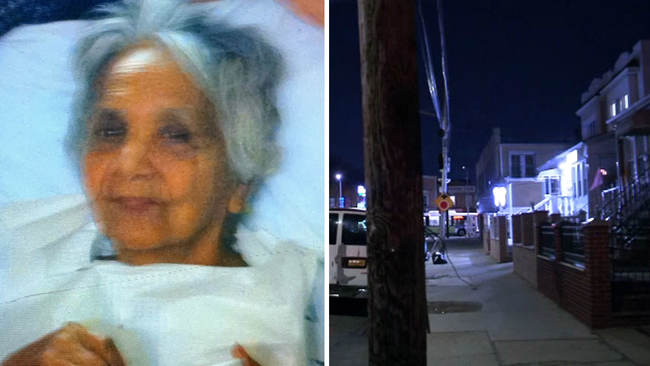