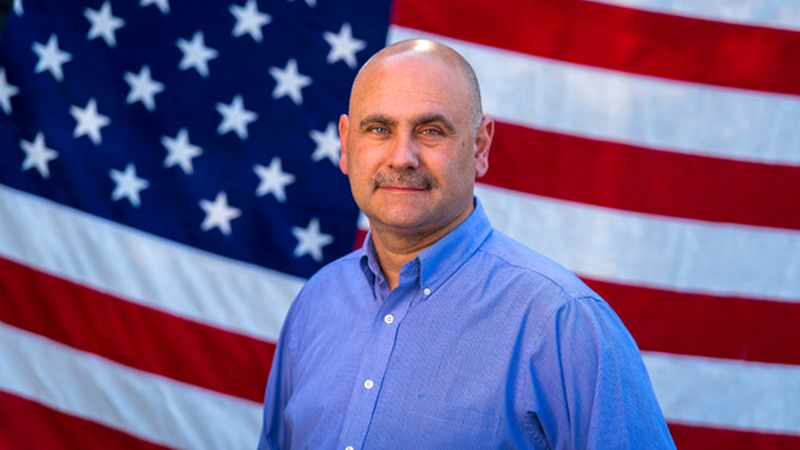 He is charged with five counts of perjury, offering a false instrument for filing, violation of the prohibition on dual office-holding under Suffolk County code, violation of the prohibition against conflicts of interest under general municipal law, and intentional failure to file an accurate financial disclosure statement under Suffolk County code.

He pleaded not guilty in court in Riverhead, where the indictment was unsealed, and then proclaimed his innocence.

His lawyer, Ray Perini, told reporters afterwards, "You may not like the optics of it, but it was not a crime."

Prosecutors claim that after he was elected legislator, Sunderman continued to maintain employment as District Manager for Centereach Volunteer Fire District despite county ethics rules that prohibit dual office holding.

"This was a violation of the very laws that Legislator Sunderman has sworn to uphold," District Attorney Tim Sini said. "These laws are in place to prevent potential conflicts of interest for lawmakers, prevent corruption and protect the integrity of ethics investigations. We investigated this case carefully, comprehensively and objectively, we presented the evidence to a Grand Jury of Mr. Sunderman's peers, and the Grand Jury voted to indict Mr. Sunderman."

It is further alleged that he established a shell corporation with his wife so that he could maintain his employment. Prosecutors claim that he lied under oath when questioned about the alleged scheme.

On December 6, 2017, Sunderman received an opinion from the Suffolk County Board of Ethics that continuing to serve in these roles while serving as a legislator would constitute a violation of the Suffolk County Code's prohibition on dual office-holding. Sunderman resigned from his position with the Center Moriches Fire District.

Sunderman is alleged to have attempted to circumvent that ruling by creating a shell company in his wife's name, Now That's Fire Management, Inc., and arranging for the Centereach Board of Fire Commissioners to hire him through that company for $10,000 per month.

Vouchers and purchase orders that Sunderman signed as "DM" or "District Manager" included those that authorized $60,000 in payments to Now That's Fire Management, which authorities say is a violation of state municipal law regarding conflicts of interest.

"Mr. Sunderman was personally put on notice: the Ethics Board told him specifically not to engage in this employment," Sini said. "Not only did he continue his work with the Centereach Fire District, but, while doing so, he personally authorized $60,000 in payments to the shell corporation that he had created in his wife's name."

Following receipt of a complaint, the Suffolk County Board of Ethics began an investigation into Sunderman's employment with the Centereach Fire District. On October 29, 2018, during a deposition in connection with the investigation, Sunderman allegedly perjured himself on numerous occasions, including denying that he received any income from his continued work for the Centereach Fire District.

Bank records obtained by the Suffolk County District Attorney's Office showed that Sunderman was a signatory on Now That's Fire Management's corporate bank account, that the account was used for Sunderman's personal expenses, and that Sunderman had personally engaged in over 100 transactions and spent thousands of dollars using a debit card issued to him on that bank account.

Sunderman also allegedly denied under oath managing fire district staff members after January 2018. Evidence developed over the course of the investigation showed that Sunderman continued to manage employees and represent himself as "District Manager" until he resigned from the position in June 2018, after the Board of Ethics began to investigate his conduct.

On April 23, 2019, Sunderman allegedly intentionally failed to disclose his outside employment and income as well as his wife's income from the Centereach Fire Department on a financial disclosure form filed with the Suffolk County Board of Ethics for the 2018 reporting year.

He is due back in court on August 13. If convicted of the top count, Sunderman faces a maximum sentence of two and one-third to seven years in prison.