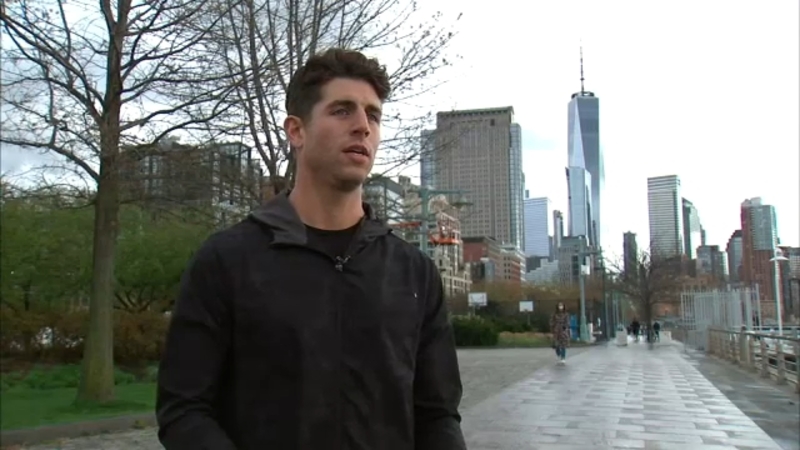 NEW YORK (WABC) -- They say running is the ultimate solo sport, but when Tom Black runs, he is never alone.

When he runs, his dad is close to his heart. Three years ago, his father - athletic and healthy, had a sudden heart attack. Black nearly lost him.

"It was a really hard week for me, I didn't really know how to digest it. I knew while it happened, the first day, I couldn't really stop crying in the hospital. I was like I can't believe I'm going to have to go through the rest of my life without my Pops?" Black said.

Hospitalized for a week, Black would only leave his dad's side to run and clear his head.

That summer after his father came home, and after he fell in love with running - with only a few months to train, Black ran the New York City Marathon for the American Heart Association. He ran to raise money and raise awareness.

"Everyone should be learning hands-only CPR. Everyone should understand that, and also be aware, know where an AED is in case of emergency," said Meg Gilmartin of the American Heart Association.

That message is one Black is trying to spread.

When his dad went into cardiac arrest, Black ran to the gym next door to grab an automated external defibrillator or an AED. His father's only hope of survival was CPR and that defibrillator being used within five minutes of collapse.

"If we didn't act so quickly when my dad went down, then he probably wouldn't have had a 100 percent recovery," Black said.

On Saturday, Black will be running 50 miles around the city to raise awareness about heart disease and promote a healthy and active lifestyle.

"Whether you're running outside, or even quite frankly taking the time to vacuum for 20 minutes, which really exerts exercise for your heart, any and all movement is relevant," added Gilmartin.

"I know a lot of people don't like running, but just getting out there - even if you're walking for an hour will give you benefits that you can see three or four months from now," Black said.

As for Black, he has been running marathons ever since - because at the finish line is his dad...waiting for him and cheering him on.