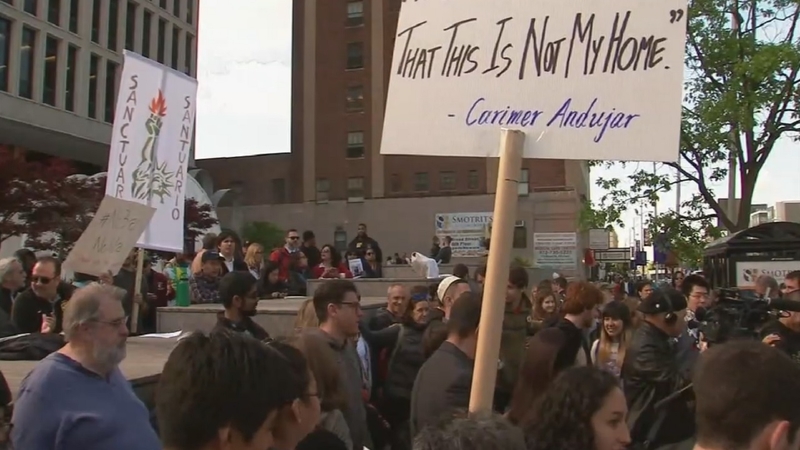 NEWARK, New Jersey -- A rally was held Tuesday for a Rutgers University engineering student who had been facing possible deportation.

Students turned out in support of Carimer Andujar, who came to the United States with her mother and sister to escape domestic violence in the Dominican Republic.

Assemblyman Gary Schaer voiced his support Monday for the Passaic resident, whose protective status under the federal Deferred Action for Childhood Arrivals (DACA) policy is now in question as she awaits a hearing with deportation officers.

"Carimer is an intelligent, civic-minded person who has lived by the rules while pursuing a shot at the American Dream with the hopes of earning a Master's degree," Schaer said. "At a time when she should be focused on studying for her finals, she's instead consumed by the worry that everything she has worked for could be taken away from her."

Andujar, a junior, attended local schools and graduated from Passaic High School before enrolling as a chemical engineering student at Rutgers. She had been awaiting renewal of her status as protected under former President Barack Obama's 2012 DACA executive order when she received a letter to report to a deportation officer, a request considered unusual given her status.

"The whole goal of DACA is to ensure that children who are brought here at a young age with no control over the situation, who adhere to our laws and work hard, should not be penalized, but instead have the opportunity to contribute to our society," Schaer said. "Carimer has epitomized this and devoted her free time to protecting other hard working, civic-minded individuals like herself."

Schaer joined around 200 supporters at the rally, held in front of the Peter Rodino Federal Immigration Building in Newark, where she met with the deportation officer. She was questioned and provided her fingerprints. Once released, she thanked protesters and said she is willing to fight to stay in America because she calls this country home.

She has been a vocal advocate for undocumented students and a critic of President Trump's immigration policy.

"I want to thank all those who have come out to support Carimer Andujar," Congressman Frank Pallone said in a statement. "Her story is that of so many immigrants throughout our country and we need stand up and say 'no more.' Your voices will send a message to the Trump administration that its extreme policies are contrary to American values and that they are simply unacceptable."
Related topics:
newarkdeportationrallyimmigrationrutgers university
TOP STORIES
Flight from NYC diverted after passenger assaults flight attendant
Rider slashed in face on NYC subway train during dispute
11-year-old killed when NY trooper rammed her family car: Officials
AccuWeather: Plenty of sun and seasonable
WABC-TV honored with Edward R. Murrow Award
FDNY unions plan to protest vaccine mandate outside Gracie Mansion
Work slowdown blamed as trash piles up on Staten Island
Show More
AG Letitia James preparing to announce run for NY governor: Source
5 arrested in scheme to mail cocaine to NY in children's' lunchboxes
The Countdown: NYC mayor, NJ governor races approach final stretch
Mayor commits to removing scaffolding at NYCHA buildings
12-year-old boy describes crocodile attack at Cancun resort
More TOP STORIES News