Boy gets Wolverine prosthetic hand made by Manhattan students

Tim Fleischer has the amazing story from the Upper East Side.

NEW YORK (WABC) -- Some high school students in Manhattan are using their math lessons to lend a literal helping hand, and Eyewitness News was there to witness the emotional and exciting outcome.

Students in engineering and math classes at the Convent of the Sacred Heart created and built prosthetics using a 3-D printer, and on Friday morning, 6-year-old Natanial Guilmart received his new hand. Guilmart was born with just a thumb on his right hand.

Nataniel thanked the students as he was fitted with the new hand, a Wolverine/X-Men inspired prosthetic, complete with removable fake claws. He was able to pick up his first objects, and he also gave high fives to all the students.

"I know he has been waiting for his hand for quite some time," math department head Caroline Latham said. "And just to see him actually have it, he told his mother new he could actually count to 10."

His parents, from Richmond, Virginia, watched as Nataniel couldn't wait to trying picking up objects.

"'Let's see how I'll figured this out, let's go pick things up,'" mom Jeanie Guilmart said. "And he did immediately...he was able to pick up those objects."

With the help of the state-of-the-art 3-D printer and a group called E-NABLE, the students were able to come together to help children in need. Two other students, 16-year-old Justyn and 6-year-old Issac, received their hands in the mail.

"It's not just that you're doing a project," student Brennan Gallagher said. "In the end, the outcome of the project is going to help someone, which is really cool."

How it all works is surprisingly simple and inexpensive.

Through E-NABLE, the students were matched with the three children. By calculating and scaling each boy's measurements and taking into account their unique personalities, the kids created the custom designs -- which easily become a reality with the help of the printer.

"Knowing we can make a 3-D hand with it opens up so many possibilities," student Daniella Rossi said. "I'm excited for the future."

"One of the biggest things you get that makes you cringe as a teacher is that question, of when are we going to use this in the real world," teacher Tanya Lerch said. "So to suddenly have this project where they not only saw how it was helping the real world, but there was a real person receiving it on the other end."

When Lerch first heard of the E-NABLE project, she knew her students would jump on board. Now, the all-girls school on the Upper East Side is one of only a select few in the country participating in the project.

"They're using their heart, they're using their brain, they're here after school working hard when they don't have to be," Lerch said. "I think it was a really nice change of pace for them to do something that is helping someone else, and to see that engineering can be used for the good of people."

It's truly a labor of love that will undoubtedly be well received this holiday season. Especially for Natanial.

"Just knowing that we helped him have maybe a better life is just amazing," student Darcy Riano said.

And believe it or not, this is not an expensive endeavor. Granted, these aren't medical-grade prosthetics, but they're functional and only cost about $20 a hand to create.

The staff at Sacred Heart hopes upon seeing this, more schools will jump on board.

"He gets to live in a world where everything is an adventure all the time," dad T. Guilmart said. "And this is just another wonderful and great adventure." 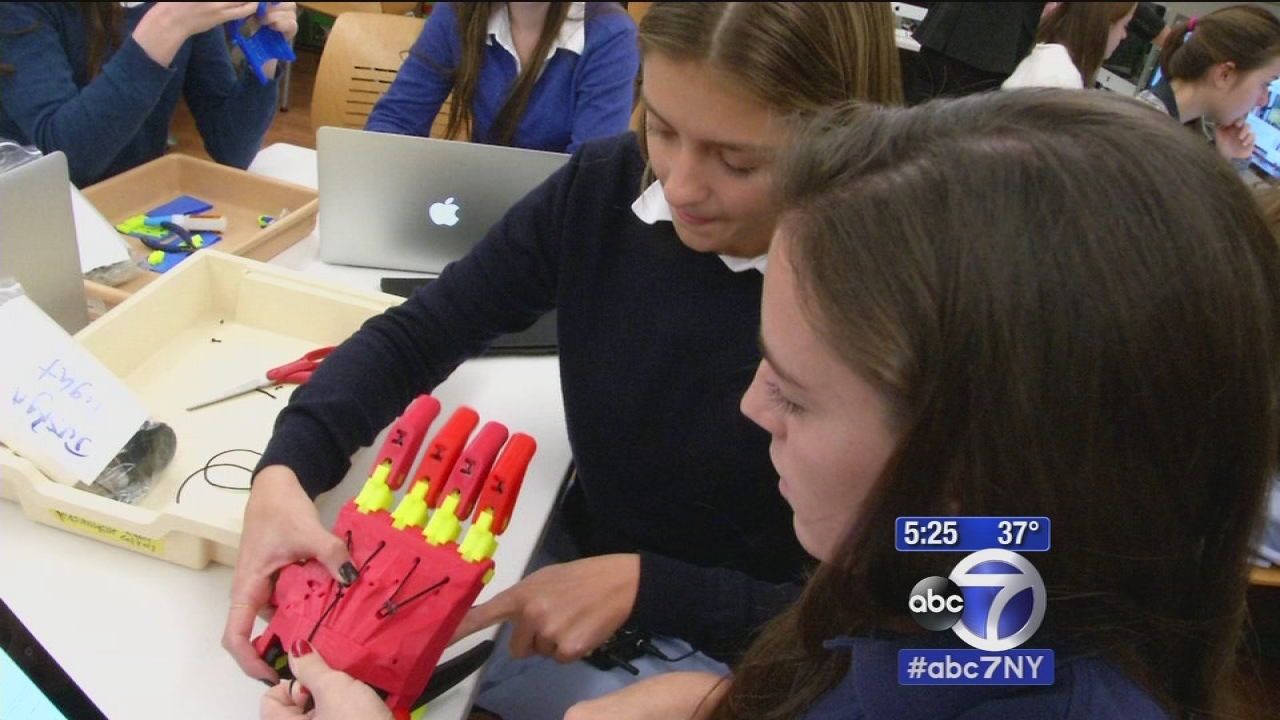