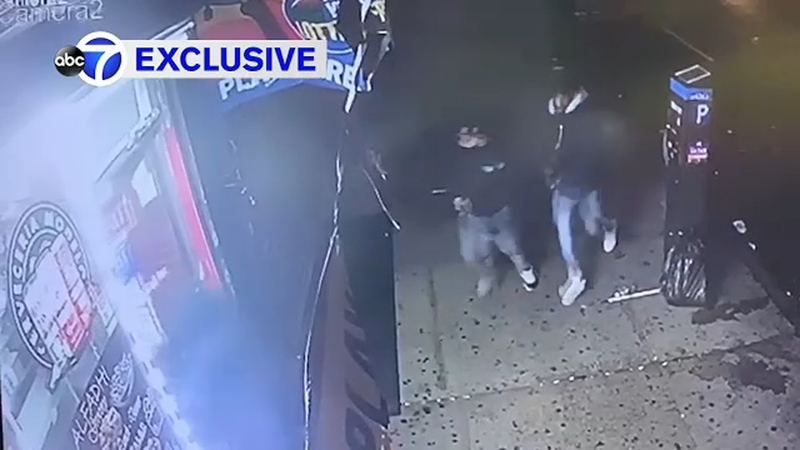 EAST HARLEM, Manhattan (WABC) -- A teenager is lucky to be alive thanks to the quick actions of NYPD officers in East Harlem, even as authorities continue to search for a second suspect.

Video obtained by Eyewitness News shows a 19-year-old running for his life as he was being chased by two men on Third Avenue near East 106th Street early Saturday.

One of the attackers appears to be holding a machete, and they struck the teen three times on his arms before he escaped into a store.

The worker locked the door and called police.

Exclusive video of #Harlem #machete attack, and speedy work by cops of @NYPD23Pct to save the victim from bleeding out. At 11 #abc7ny pic.twitter.com/c1Uy1EzkTE

Officers took out tourniquets and applied them to each arm before driving the victim to the hospital.

A neighbor who witnessed the attack said he is angry.

"When people see stuff like that, step in and advise the other person you know you're about to do something real bad to that person," Carlos Ortiz said. "You're about to go to jail. Think about it before you do it.."

The NYPD tweeted praised for the officers from the 23rd Precinct who responded, using their tourniquets -- a tool only added to their belts about two years ago -- to stop the bleeding.

When a teen was assaulted with a cane sword, @NYPD23Pct Officers Brady & Ortiz jumped into action, applied tourniquets & rushed him to the ER.
Using video from the scene, POs Bischoff & Medina soon spotted & arrested the suspect.
Outstanding work — from lifesaving aid to arrest. pic.twitter.com/OHC5pXadgf

Those officers also made an arrest in the case, and 19-year-old Abner Suazo faces charges of assault, criminal possession of a weapon and menacing.

Suazo was arrested twice in 2019, once for assault in July and once for criminal possession of a weapon in November.

The second man remains on the loose.

The victim is expected to make a full recovery.