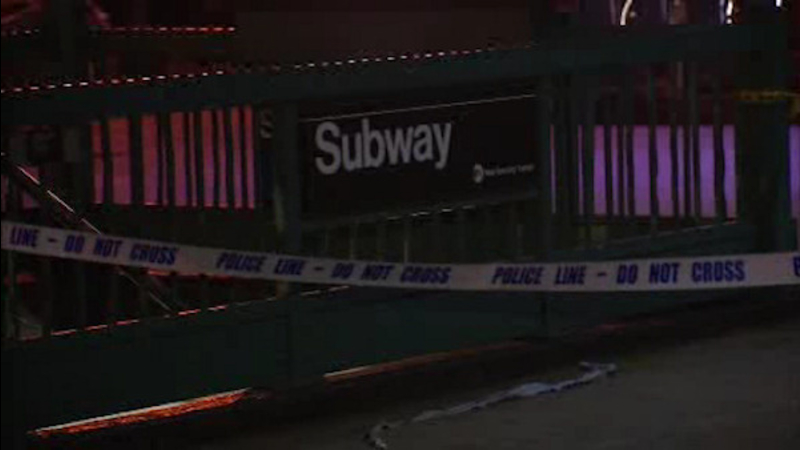 BEDFORD-STUYVESANT, Brooklyn (WABC) -- Two men were shot while walking down the stairs into a Brooklyn subway station Tuesday afternoon.

Police spent all night searching for evidence outside the Utica Avenue A/C train station in Bedford-Stuyvesant.

There was a hail of gunfire at the height of rush hour around 5 p.m. Two men, ages 27 and 45, were shot in the back. One victim was found on the staircase. The 27-year-old victim is in serious condition and the 45-year-old man is in critical condition at Kings County Hospital.

One of them, cops believe, was the intended target. The other man is believed to be an innocent bystander.

Police are looking for one person who fled the scene south on Atlantic Avenue.

Investigators believe the gunman was captured on surveillance video from a nearby grocery store, minutes before the shooting.

"You don't know where it was coming from, who was shooting," another witness said.

"It seems as though he came out, doubled back into running into this young man, chased him down the subway and just started blasting," said Tony Herbert, a community activist. "Is it an ongoing beef or something we don't know? But it's just stupid to think you can take somebody's life."

Fortunately, no one died on the corner, which was crowded with commuters, who had the fright of their lives.

"It's just real scary. Scary for something like that to happen, rush hour, it was just, like I said anybody's bullet. Anybody could have gotten shot," a commuter said.