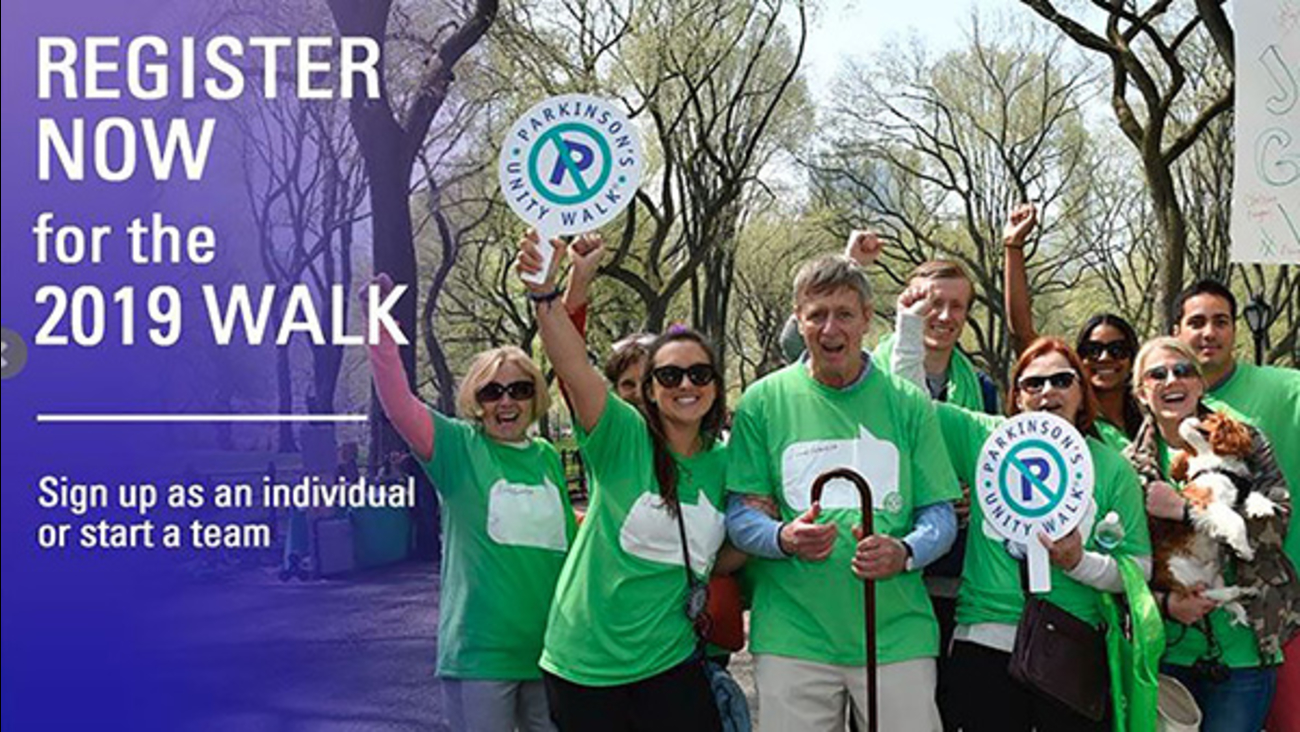 KINGSTON, New Jersey (WABC) -- Let's walk together, in the largest grassroots fundraiser for Parkinson's disease research in the United States!

The Parkinson Alliance announced today that the 25th Parkinson's Unity Walk will take place on Saturday, April 27, 2019, at 8:30 am in New York City's Central Park to raise funds and unite the community in the battle to eradicate Parkinson's disease.

Thousands of participants including patients, caregivers, family, and friends, are expected to gather in the largest single-day grassroots fundraiser for Parkinson's disease research in the United States.

Since the Unity Walk's inception in 1994, $25 million in donations have been raised, 100% of which has funded hundreds of research studies, taking us steps closer to finding a cure for Parkinson's disease. This was the vision of the founder of Parkinson's Unity Walk, Margot Zobel, 25 years ago, when Margot, with the help of 200 friends, family members, and fellow patients held the first walk, raising $16,000 for research. For 25 years, the Unity Walk has continued to grow in participation and impact, with over 11,000 participants walking together at last year's event.

Martin Tuchman, Chairman of The Parkinson Alliance, stated that "Last year the Unity Walk raised over $1.5 million and while every penny of that is now funding vital research, until we find a cure, we must continue walking and funding research. Parkinson's disease is a chronic, degenerative, neurological disorder that affects at least one million people in the United States. Sixty thousand new cases (one person every nine minutes) are diagnosed each year, and we need continuing research to keep advancing our progress."

In addition to the 1.4-mile wheelchair accessible walk route, participants will have opportunities to meet with healthcare experts and learn more about nationally recognized Parkinson's disease exercise programs, and movement disorders centers. Carol Walton, Executive Director of the Parkinson's Unity Walk, explained that "There are many reasons to walk with us. The Unity Walk is more than a fundraiser; it is a gathering for the community to meet and be inspired by other members in the Parkinson's community. Visit with our sponsors to learn about current medical therapies and learn about the support that's available for them." Walton added that "In addition to our sponsor and Parkinson's disease informational booths, festivities include our Make-a-Sign and Kids' Booth."

With the backing of our supporters, we have funded hundreds of studies since the Unity Walk's inception in 1994. We are proud to partner with our sponsors. Because of their support, every donation goes directly to help fund Parkinson's disease research for four leading organizations: American Parkinson Disease Association, Parkinson's Foundation, The Michael J. Fox Foundation for Parkinson's Research, and The Parkinson Alliance. Sunovion Pharmaceuticals Inc. is the Premier Sponsor for the 2019 Parkinson's Unity Walk. Additional sponsors include US WorldMeds, Abbott, Adamas, Lundbeck, UCB, AbbVie, Acorda, Amneal, Boston Scientific, Kyowa Kirin, LSVT Global, Medtronic, Vertical Pharmaceuticals and Voyager Therapeutics.

Please join us on Saturday, April 27th in New York City's Central Park for the 25th Parkinson's Unity Walk. The Walk's rolling start begins at 8:30 am. Registration, and Sponsor and Informational Booths are also open at 8:30 am. For information, please visit our website at unitywalk.org or call (866) 789-9255.

About The Parkinson Alliance
The mission of The Parkinson Alliance is to raise funds for research to end Parkinson's disease, support the development of new therapies, and improve the quality of life for those living with the disease through patient-centered research and resources. The Parkinson Alliance stands as an umbrella organization for the Unity Walk, Team Parkinson, and other fundraising events held around the country. Taken together, we have funded nearly $30 million in research since our founding.