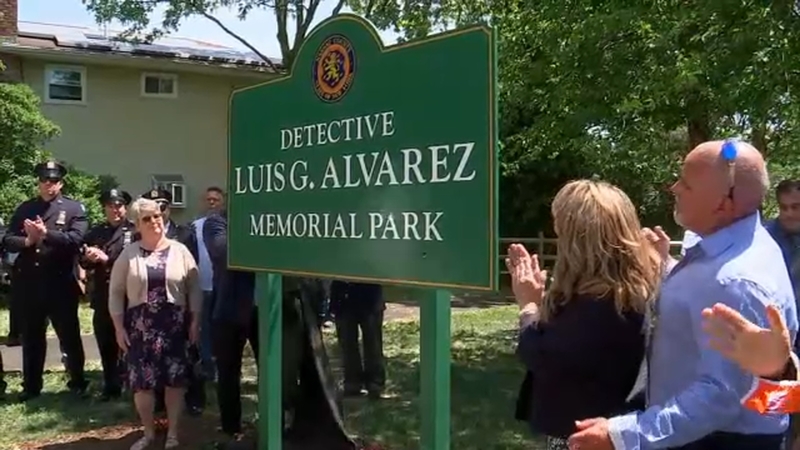 OCEANSIDE, Nassau County (WABC) -- A park in Oceanside was named after an NYPD detective who was a champion for 9/11 victims' rights.

Nassau County officials were joined Tuesday afternoon by the family of Detective Luis G. Alvarez and other NYPD officers for the unveiling.

Alvarez was from Oceanside and was a member of the NYPD Bomb Squad.
County Executive Curran introduced legislation in August 2019 to rename Terrell Avenue Park as a tribute to the fallen 9/11 hero, and since then the County has worked with the family to redesign the park.

Retired NYPD Bomb Squad Detective and leading champion for September 11th Victim Compensation Fund, Det. Luis G. Alvarez passed away in June 2019 at 53 after a battle with cancer stemming from his assignment at Ground Zero.

Det. Alvarez transfixed the nation just weeks before his death with his testimony alongside activist and comedian Jon Stewart, to extend the September 11th Victim Compensation Fund Act.

His advocacy resulted in the passage of the "Never Forget the Heroes: James Zadroga, Ray Pfeifer, and Luis Alvarez Permanent Authorization of the September 11th Victim Compensation Fund Act" which provides funding through the year 2092.
His family hopes the park reminds people of the man that Alvarez was.

"We continue to get these beautiful opportunities to honor my brother," Phil Alvarez said. "And it is heartfelt. It is heartfelt that he is never forgotten."

This newly redesigned Nassau County park was dedicated in his honor to serve as a symbol and reminder of his sacrifice and unwavering fight for 9/11 first responders and as a tranquil neighborhood space for all to enjoy.

The park was the dream of Alvarez's widow, Lainie Alvarez. She said she wants it to be a place of healing and reflection.

"A place where one can come to reflect about life," she said. "To find a sense of peace, clarity and connection with nature, each other and most importantly with themselves."

The park features a large plaque with the name of the fallen detective and the words "All who wander are not lost." The park also has a clock tower which reads, "Be Present." The clock itself doesn't have any numbers. Instead, the word "Now" is written 12 times around the clock.

Lainie Alvarez used a designer who specializes in Feng Shui to design the park layout.

"We continue to get these beautiful opportunities to honor my brother," Phil Alvarez, Louis Alvarez's brother, said.

At the park dedication, members of the NYPD Bomb Squad introduced the newest member of the squad - a black Labrador Retriever named Lou.

Derick Waller reports on the opening of Little Island Park!