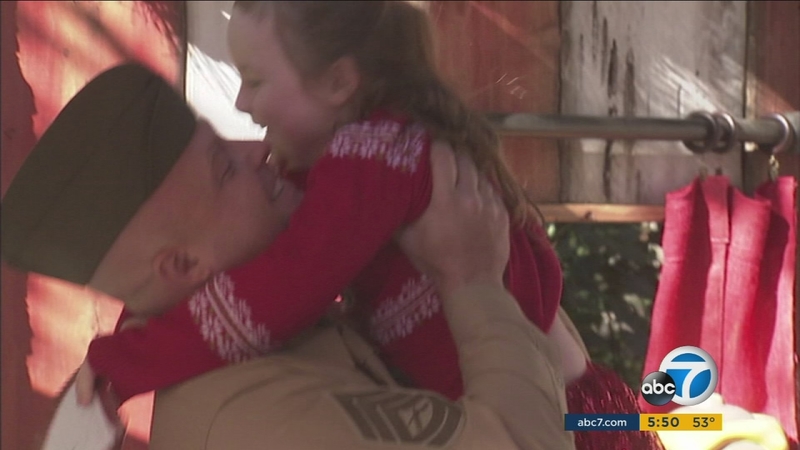 ANAHEIM, Calif. -- A Christmas wish arrived early for the 5-year-old daughter of a U.S. Marine as a touching surprise took place at Disneyland on Monday.

As Abigail Demo waited in line to see Santa, her wish list was already completed.

"I wished for my daddy to come home," Abigail.

It's a request she stopped to make at a wishing well at Disneyland on her way to visit Santa.

Her 34-year-old father, Brian Demo, is a Marine who has been deployed for seven months.

It's his fifth deployment, but his first time away for Abigail.

Santa told Abigail about Christmas magic and had her ring a bell for her wish to come true.

What she didn't know was that her dad was hiding around the corner after making it home earlier than expected.

"It was worth it. It was an amazing surprise and to see her sweet little face it was perfect, said Jennifer Demo, Abigail's mother.

The surprise was in the works for several months after Abigail's father emailed Disneyland stating he wished to surprise his daughter upon returning to the U.S.

"She looked very surprised, which was perfect," Brian Demo said with a smile on his face.

"I'm so happy to see him," Abigail said after her big surprise.

Much has happened in seven months as Abigail's father can attest.

"She's a lot taller than I remember," he said.

And Abigail's mother had a surprise of her own for dad when he arrived Sunday night. She's been working out and dropped 80 pounds while he was gone.

"I picked him up down at Camp Pendleton and we got to have a date night, just the two of us, which was wonderful before I have to share him because I don't think she's [Abigail] going to let go of him now," she said.