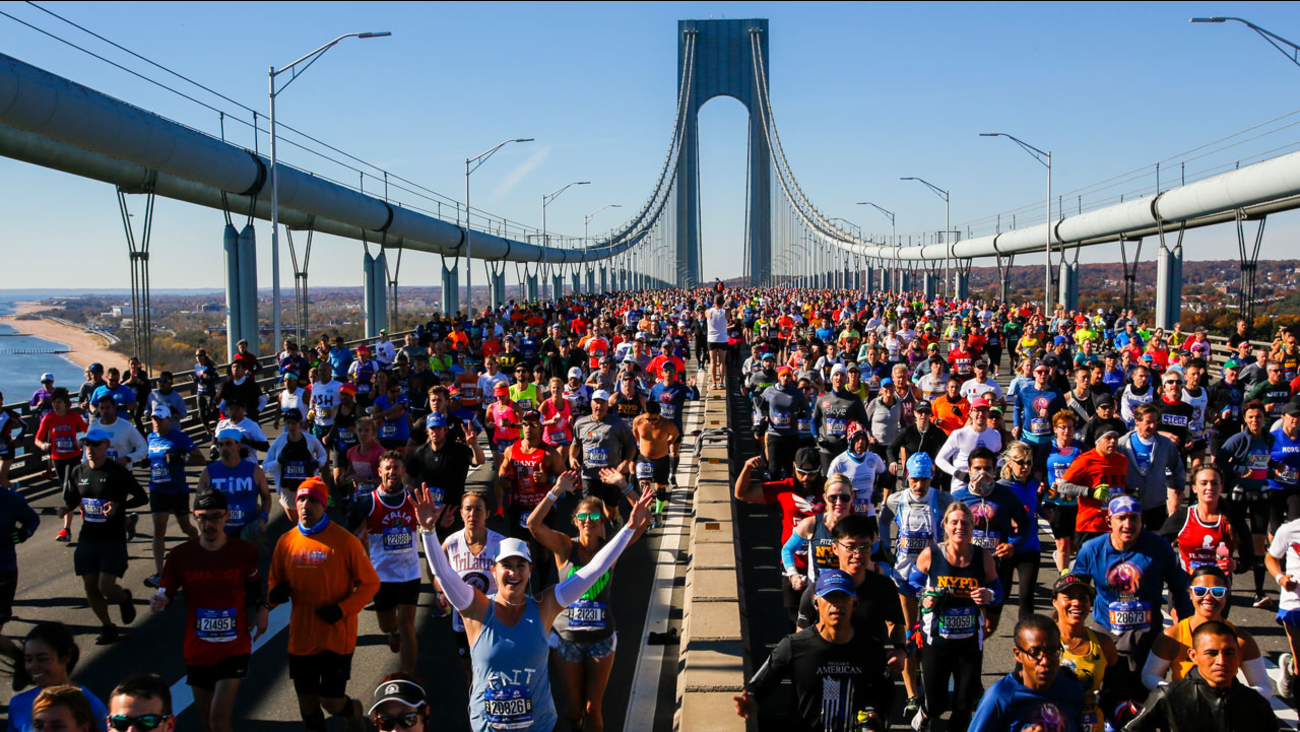 NEW YORK -- There are many ways for marathoners, friends, family, and fans all over the world to tune in to the TCS New York City Marathon and all the action. Here's a breakout of the top options from ABC7NY and the New York Roadrunners.

ON MOBILE DEVICES: This broadcast is available live on tablets and smartphones with the ABC App in New York and the ESPN App nationwide. Download these apps in the App Store or Google Play. Access to the ABC and ESPN apps is available through participating pay-TV providers.

Where to Watch on the Course
Over 1,000,000 fans line the TCS New York City Marathon course to cheer on 50,000 runners throughout the five boroughs. Here's how to plan for a great day of spectating.

Experience everything the five boroughs have to offer while you're in town for the 2019 TCS New York City Marathon! Visit nycgo.com for official information about the restaurants, shops, and attractions that can be found in the neighborhoods along the course.

The best way to get around as a spectator is to take the subway. Buy a MetroCard in advance to avoid long lines on November 3; use MTA Trip Planner for up-to-date schedules.

Start
There's no spectator viewing at the start or on the Verrazzano-Narrows Bridge. Fans in the NYC metro area can watch the WABC-TV, Channel 7 broadcast, and everyone, everywhere can follow runners' progress via the TCS New York City Marathon App Powered by Tata Consultancy Services, available free of charge starting late October in the Apple Store and Google Play.

Best Spots to Watch on the Course
Here are some great places to enjoy the view and the local scene:

Williamsburg and Greenpoint, Brooklyn (Miles 10-13):Claim sidewalk space along streets lined with shops and restaurants. Enjoy local treats as you watch runners and encourage them to keep their pace as they head toward the Pulaski Bridge to cross into Queens. Subway: G, L, M, J

Pulaski Bridge (Mile 13.1):The Pulaski Bridge connects Brooklyn to Long Island City, Queens. The bridge is closed to spectators; many fans wait on the Queens side, just past the race's halfway mark, where runners appreciate some loud encouragement. Subway: 7, G, E

New Balance Mile 16 Block Party (First Avenue at 62nd Street):Join New Balance as we feature a DJ, Jumbotron, and local NYR marching band churning out NYC-inspired music. The NB Cheer Section will be lively and engaging, celebrating the distance runners have traveled and encouraging them for their final 10.2 miles. Subway: Q, 4, 5, 6

First Avenue, Manhattan (Miles 16-18):First Avenue is known for being packed with spectators who line the sidewalks and shout encouragement. The avenue's many bars and restaurants contribute to the festive atmosphere. Subway: Q, 4, 5, 6

East Harlem (Miles 18-20):Also known as Spanish Harlem, this neighborhood is home to a vibrant Latino community and provides fantastic music on race day. This is a perfect location to cheer your heart out to help keep the motivation high. Subway: 6

Fifth Avenue, East 90th Street-East 105th Street (Miles 23-24):This stretch of Fifth Avenue has the Guggenheim Museum, the Jewish Museum, the National Academy Museum, El Museo del Barrio, and the Museum of the City of New York on the east and Central Park on the west. It's a cultural hub as well as a crucial spot to catch your runners before they enter Central Park. Subway: Q, 4, 5, 6, Q
Charity Cheer Zone,Fifth Avenue, East 90th Street to East 92nd Street:Help celebrate the more than 9,000 runners who've chosen to add meaning to their run by raising funds for one of NYRR's 380+ official charity partners. This area will have cheer zones for select individual charities and a DJ to get the party going. Subway: Q, 4, 5, 6

Finish
The final miles take runners through Central Park and to the famous finish at 67th Street on West Drive. To see the final yards of the race, you'll need to buy a Grandstand Seating ticket in advance.

Post-Finish/Family Reunion
The post-finish area in and near Central Park, north of the finish line, is a runner-only zone, not available to spectators.

Alternatively, choose a local restaurant, bar, or hotel to be your meeting spot. Visit nycgo.com for options.

Use the TCS New York City Marathon Mobile App Powered by Tata Consultancy Services (available in late October) to check your runner's progress, including their post-finish exit from Central Park. For more information, call the Runner Information Hotline at 800.496.6193 and key in your runner's race number when prompted. Be aware that cellular saturation may prevent you from using your phone in the post-finish area, so plan a time and location to meet up with your runner and don't assume you will be able to reach him/her by phone.

Check back closer to race day for the Finish/Post-Finish map.

Spectator Guidelines and Tips
From mile 3 to mile 26, the majority of the course is open to spectators. Yell yourself hoarse and have a blast-here's how:

Before the Race
Get the app. If you're planning to cheer for your runner from multiple locations, use our new interactive spectator guide. This pre-race feature allows you to create an itinerary of where you would like to watch your runner during the race from our recommended viewing locations. On race day you'll be able to track your runner's progress in real-time using the map section. Tell your runners where on the course you'll be, so they know when to expect your support!

Don't stop cheering. All runners-not just yours-need and appreciate the encouragement. Make sure they can hear you! Look at their shirts and race bibs and greet them by name, number, or country.

Stay behind the blue tape or barricades and leave the roadway open for runners. Make signs, bring flags, and cheer on runners. But leave the amp at home. Unofficial use of speakers is not permitted in New York City.

Stick to the streets. Spectators aren't allowed on any of the bridges on the course. Be respectful of private property. Don't obstruct access to buildings or leave trash or signs behind.

Portable toilets are for registered runners only.

At the Finish
The race finishes at 67th Street on West Drive. Spectators can access the final approach to the finish in two ways:

Grandstand Seating:Tickets are required and are available at the expo, Pavilion, and online prior to race day. On race day, purchase tickets at the West 63rd Street entrance to Central Park.

Standing Spectator Area:Located inside Central Park from Columbus Circle to the south end of the grandstands, approximately 500 feet before the finish. NYPD, NYRR, and the NYC Parks Department may limit access at times, based on capacity. No chairs or seats are provided or allowed. There is no spectator access north of the grandstands in Central Park.

General Safety
See Something, Say Something:Safety and security are everyone's responsibility. If you see something or someone suspicious, notify a law enforcement officer or race official, or call 866.705.6626.

No-Drone Zone:Drones, photo-copters, and unmanned flying devices are illegal in New York City, and are not permitted anywhere at the TCS New York City Marathon. If you see one on or before race day, report it to a law enforcement officer or race official, or call 866.705.6626.

Unauthorized Participants:Individuals not officially registered for the race may not join the race or accompany any participant in the race. Any person without an official race bib will be directed to leave the course immediately. Bicycles, skateboards, and other unauthorized vehicles are not permitted on the course.

Race Emergency Hotline:If you see a runner in need of medical assistance on race day, call 866.705.6626

Entertainment and Cheer Zones
Race partners create designated entertainment and cheer zones to help the crowd encourage runners. Many are equipped with sign-making supplies, noisemakers, and pompons, so you can have fun while you watch for your runners. You may find giveaways, video screens, bands, or DJs at these zones to keep you pumped up.

Miles of Music
The TCS New York City Marathon boasts more musical entertainment along the course than any other race in the world. Runners and spectators can hear 130+ bands along the route-an average of five acts per mile! From brass bands to bagpipers and from punk to country, you're sure to hear live music and DJs that will get you pumped up and help you encourage your runners to keep their momentum till the finish. 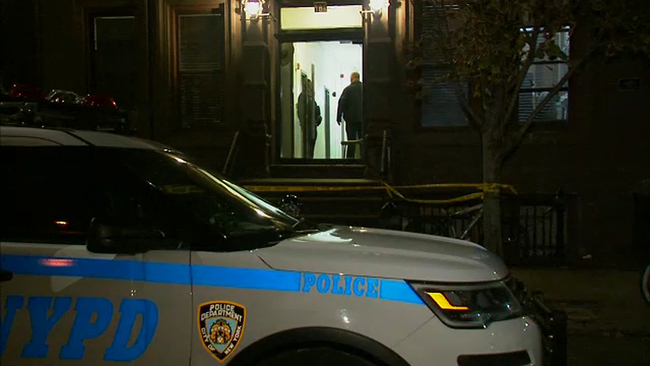 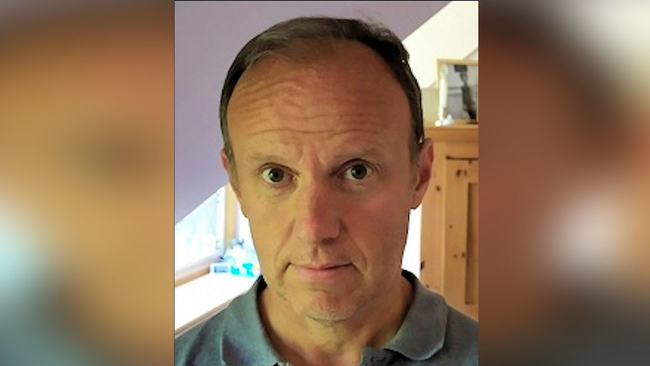