2020 MLB draft: Everything you need to know on draft day 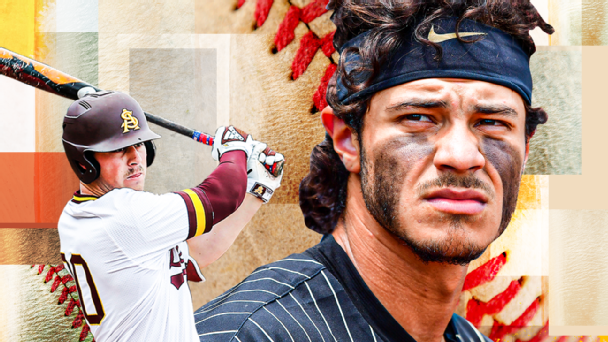 There is no baseball on the horizon, but there will be a baseball draft this week, though not in its usual form. You can watch the first round starting at 7 p.m. ET Wednesday on ESPN, with ESPN2 airing the next four rounds starting at 5 p.m. ET Thursday.

Here are some key questions heading into the draft. Be sure to check out Kiley McDaniel's top 150 prospects and latest mock draft.

How are the rules for this draft different?

The coronavirus pandemic has led to several major changes.

1. The draft will be just five rounds instead of 40.

The assigned value for the top five picks:

Under the agreement with the MLB Players Association, teams will defer bonus payments. Drafted players will receive up to $100,000 of their bonuses within 30 days of signing, with 50% of the remaining bonuses paid on July 1, 2021, and the other 50% paid on July 1, 2022.

According to Baseball America, of the 960 drafted players who signed in 2019, 680 signed for more than $20,000. There were 167 players drafted in the first five rounds, so that total suggests that 513 players selected after the fifth round received bonuses of more than $20,000. Previously, teams could spend up to $125,000 on late-round picks or undrafted players without it counting against their bonus pool.

What does all this mean? Teams will spend less in bonus payouts. Last year, the industry spent a record $316.56 million on draft bonuses, according to MLB.com. With the shortened draft and the $20,000 limit for undrafted players, total spending will drop significantly ($61 million was spent on bonuses after the fifth round last year).

Likewise, undrafted college juniors who in a normal year would have been drafted will have to decide between accepting the $20,000 max bonus or going back to school and reentering the draft in 2021.

Full coverage of the 2020 MLB draft is available here.

With high school and college seasons shut down early -- or not even started, in the case of some cold-weather states -- how have teams adjusted their draft preparation?

Front offices are watching a lot of video, conducting interviews with prospects and generally going about business as usual -- other than that whole watching games thing. Teams still have their statistical modeling, just with less data to input into those models. In a broad sense, the lack of game action implies that college players are the more known quantities -- and safer picks -- given that scouts have two previous seasons of reports to go on. On the other hand, there could end up being some great bargains to be found with high school players who might have climbed up the rankings with strong senior seasons. The "safe" college player isn't necessarily the best long-term bet.

On to the fun stuff. Whom will the Tigers take with the first pick?

Arizona State first baseman Spencer Torkelson is the odds-on favorite. He led the nation with 25 home runs as a freshman, followed that with 23 as a sophomore and was off to a great start in 2020, hitting .340/.598/.780. If he goes No. 1, he will be just the second or third first baseman to go first overall, depending on how you slice things, and the first right-handed-hitting first baseman. The Marlins selected Adrian Gonzalez first overall in 2000 -- current Tigers general manager Al Avila was then the scouting director for the Marlins -- and the Yankees selected Ron Blomberg first in 1967, though he spent most of his time in the minors and his first season in the majors as an outfielder.

Could the Tigers go in a different direction?

It's possible, especially if Scott Boras, Torkelson's adviser, draws a tough line in bonus negotiations. The Tigers like Texas A&M lefty Asa Lacy, and Vanderbilt infielder Austin Martin is a well-rounded player with speed, a plus hit tool and developing power. Still, Torkelson seems like the right fit. The Tigers have upper-level pitching depth in the minors but sorely lack bats at both the major league and minor league levels. Torkelson shouldn't need much time in the minors.

A more interesting scenario could be the Orioles with the second pick. Martin is the favorite, but he's another Boras client. The Orioles also own the 30th pick and could go with an under-slot player such as New Mexico State second baseman Nick Gonzales or high school outfielder Zac Veen to save more money to use on the 30th pick.

How is the overall quality of this draft?

Most of the comments from scouting directors indicate that it's stronger than the past two drafts and deeper in pitching prospects than position players. As mentioned, because scouts have seen the college players more, it will be interesting to see if the first round is more college-heavy than normal. Just to compare, here's the number of college players chosen in the first 30 picks of the past three drafts:

It's possible that the first six selections this year could be college players, which has never happened, with Veen the most likely high schooler to crack the top six. It's worth noting that teams have gone more for college players in recent years anyway. Last year, 71% of the picks in the first five rounds were college players, the highest percentage ever.

Who are five intriguing players to watch for?

Here's my list of the most interesting first-round candidates:

Nick Bitsko, RHP, Central Bucks East High School (Doylestown, Pennsylvania):Kiley McDaniel wrote about Bitsko, a pitcher who reclassified in January from the 2021 draft to this year, so scouts haven't seen much of him (his high school season never started). What they can look at, as Kiley reported, is videos Bitsko has posted with the advanced pitch data that clubs covet these days, including a fastball that hit 98.5 mph with Justin Verlander-like spin efficiency. Bitsko also has the makings of a good curveball and slider. Teams have little idea of his command in game situations, whether he can hold his velocity and so on. He has become a candidate who can go in the top 10.

Nick Gonzales, 2B, New Mexico State:Is he one of the best hitters in the draft or a product of one of the most hitter-friendly environments in college baseball? (Alden Gonzalez presents evidence of the former.) Gonzales hit .432 with 16 home runs last year and hit .448 with 12 home runs in 16 games this season. He also hit well last summer in the wood-bat Cape Cod League. On the other hand, the most recent first-round pick from the state was University of New Mexico product D.J. Peterson, who went 12th overall to the Mariners in 2013 and never reached the majors.


Patrick Bailey, C, NC State:He's No. 11 on Kiley's list and is regarded as the top catcher in this year's class. He's a switch-hitter who grew up idolizing Yadier Molina, and as with Yadi, defense is his strength, but there are some positives to like with the bat as well, including 29 career home runs at NC State and a high walk rate. The profile isn't super sexy, but if he can carry his power and walk rate to pro ball, he could move quickly and become one of the better catchers in the majors.

Pete Crow-Armstrong, OF, Harvard-Westlake High School (Los Angeles):From the same elite prep school that recently produced Lucas Giolito, Max Fried and Jack Flaherty, Crow-Armstrong -- have fun fitting that on the back of a uniform -- is the son of two actors (his mother played the mom in "Little Big League"). He has a sweet, left-handed swing and the wheels to play center field. His power is the long-term question. In many ways, his profile is similar to that of Mickey Moniak, who went No. 1 overall to the Phillies in 2016. Moniak has struggled in the minors, so it's a profile that can be tough to project, but some team will take Crow-Armstrong in the mid-to-late first round.

Cole Wilcox, RHP, Georgia:Teammate Emerson Hancock will go much higher, but Wilcox has huge upside. A potential first-round talent in 2018, Wilcox is now a draft-eligible sophomore listed at 6-foot-5, 232 pounds, with a fastball that has touched 100 mph. He didn't dominate his freshman season, with a 4.07 ERA and control issues (5.7 walks per nine), but he came out firing more strikes in 2020, with a 32-2 strikeout-to-walk ratio. If it all comes together, he could be a bargain late in the first round.

Any team to watch?

Because the Orioles have a competitive balance round pick, their draft pool is actually a little larger than Detroit's. The Orioles have the second, 30th and 39th picks. The Royals also will be interesting. Assuming the top three college players -- Torkelson, Martin and Lacy -- go Nos. 1, 2 and 3, the Royals with the fourth pick are the team at which the draft starts getting unpredictable. The Royals pick fourth, 32nd and 41st.

Any relatives of note?

As always in the baseball draft, there are many players with familiar names:

RHP Bryce Jarvis:The Duke product is the son of Kevin Jarvis, who pitched 12 seasons in the majors (with 10 teams). The Yankees drafted Bryce in the 37th round last year, but a strong summer and start to 2020 have turned him into a possible first-round pick.

RHP Tanner Witt:This is the son of former major leaguer Kevin Witt, currently a minor league hitting instructor with the Marlins. Tanner had two-way potential, but the 6-foot-6 righty was throwing in the mid-90s this spring and could slip into the back of the first round.

LHP Reid Detmers:The Louisville left-hander could go in the top 10 and was off to a great start in 2020, with 48 strikeouts in 22 innings in his first four outings. Father Kris pitched six seasons in the minors and reached Triple-A.

C Tyler Soderstrom:Tyler is the son of Steve Soderstrom, the sixth overall pick in 1993 out of Fresno State, who had arm issues as a pro and made just three major league starts. Tyler is expected to go in the first round.

C Daniel Susac: His brother, catcher Andrew Susac, was in spring training with the Pirates this year. Daniel, a catcher from Jesuit High School in Sacramento, California, could go in the first two rounds.

2B Darren Baker:You might remember Dusty's kid from the 2002 World Series. He's now a second baseman at Cal, and he hit .306 last year, but his lack of power (zero home runs) probably means he will go undrafted.

SS Jake Boone:This Princeton player is Bret's son and Aaron's nephew. The Boones, of course, are already a three-generation major league family, with patriarch Ray and his son, Bob, father of Bret and Aaron. All four played at least 12 years in the majors. Jake hit .312 with one home run as a sophomore at Princeton, and though he isn't a top prospect, he is at least getting a quality education.

There are many more who could be on this list, but they'll go undrafted in this five-round draft. One more fun name: Jaden Agassi, son of Andre Agassi and Steffi Graf, two tennis players you might have heard of. Jaden is a right-handed pitcher and is committed to USC.

Whom are the Astros looking at?

Good one. The Astros do not have a pick in the first two rounds, as punishment for the sign-stealing scandal. They did, however, receive the 72nd pick as compensation for losing Gerrit Cole in free agency. 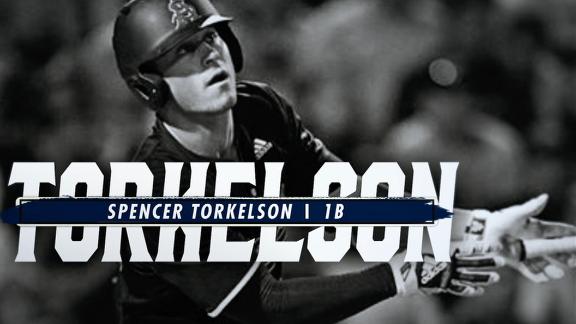 Get to know top MLB draft prospect Spencer Torkelson
Spencer Torkelson explains how he watched Barry Bonds growing up and reflects on the possibility of being the first college first baseman to be selected first overall. 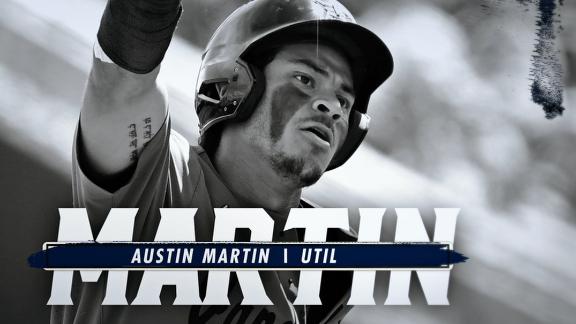 Austin Martin hates losing more than he likes winning
Top MLB draft prospect Austin Martin describes his competitive nature and reveals when he realized he wanted to play baseball for the rest of his life. 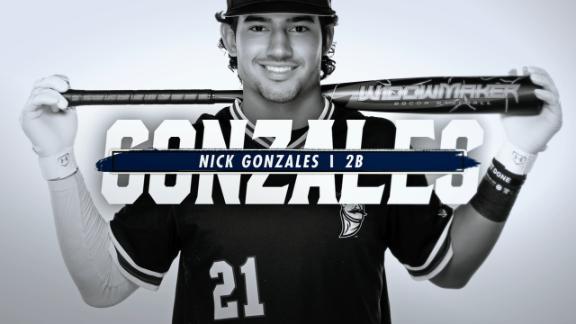