49ers great Dwight Clark dies at 61 after battle with ALS 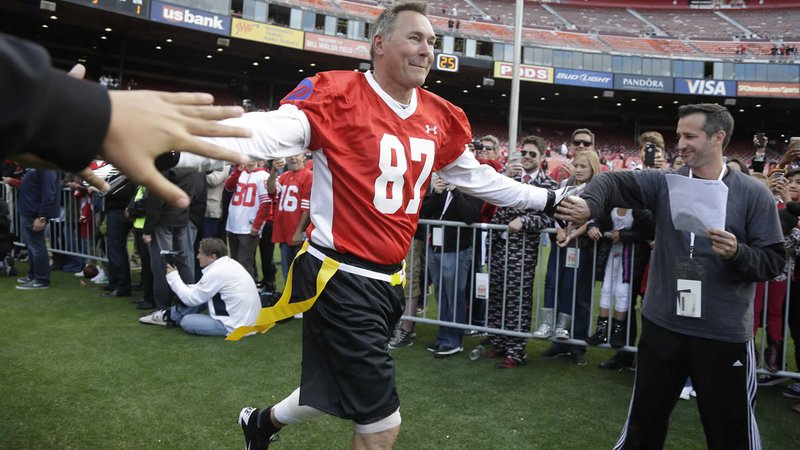 SAN FRANCISCO -- Dwight Clark, one of the San Francisco 49ers' all-time greats , died Monday after a battle with Lou Gehrig's disease. He was 61.

"I'm heartbroken to tell you that today I lost my best friend and husband," she wrote. "He passed peacefully surrounded by many of the people he loved most. I am thankful for all of Dwight's friends, teammates and 49ers fans who have sent their love during his battle with ALS."

I’m heartbroken to tell you that today I lost my best friend and husband. He passed peacefully surrounded by many of the people he loved most. I am thankful for all of Dwight’s friends, teammates and 49ers fans who have sent their love during his battle with ALS. Kelly Clark.

The team tweeted about Clark on Monday afternoon, writing, "We extend our condolences and prayers to Dwight's wife, Kelly, his family, friends and fans, as we join together to mourn the death of one the most beloved figures in 49ers history." They also posted a statement online.

Clark was on the receiving end of "The Catch," one of the most famous plays in NFL history. In 1982 it helped the 49ers get to the team's first Super Bowl. Clark went on to become a Pro Bowler -- and now has his 49ers jersey retired.

Clark, who suspected his years playing football lead to the condition, announced his ALS diagnosis in March 2017. In an open letter, Clark said started experiencing the symptoms of ALS in his left hand back in 2015.

I wanted to share some unfortunate news: I have ALS. https://t.co/RqU0fFT98g

49ers CEO Jed York released a statement after Clark announced his diagnosis, saying he was "deeply saddened" and that he would receive full, unconditional support from the team and staff.

"Many know Dwight as an iconic figure in 49ers lore, whose accomplishments on the field brought joy to fans around the world. Our organization is fortunate to know him more intimately as a wonderful man who has given so much of himself as an ambassador to the entire Bay Area. We will stand alongside Dwight and his family as they wage this battle," York said.

Clark won two Super Bowls with the 49ers during a nine-year career that ended in 1987. He memorably pulled down the winning touchdown pass from Joe Montana in the NFC championship game against the Dallas Cowboys.

The play happened on Jan. 10, 1982, when the upstart 49ers hosted the Cowboys. With the 49ers facing a third down at the Dallas 6 with less than a minute to play, coach Bill Walsh called "Sprint Right Option."

Montana rolled out and retreated under pressure from Ed "Too Tall" Jones and Larry Bethea before lofting the ball toward the back of the end zone. Clark leaped to make a fingertip catch over Everson Walls and the 49ers went on to win the game 28-27 and then their first Super Bowl two weeks later against Cincinnati.

"Start of a dynasty," said former 49ers president Carmen Policy, who later hired Clark as general manager of the Cleveland Browns. "I don't let myself go down the road of what would have happened if he doesn't make that catch? As Joe Montana says, what would have happened if I didn't throw that pinpoint pass perfectly angled to be in the only spot where he should catch and no one else would be able to interfere with it. But without that play, I wonder where we would have been. And I stopped thinking about it, because so much happened after that. And yet, Dwight seemed to handle it in stride and the two of them, The Butch Cassidy and the Sundance Kid, they used to have fun playing off of each other, or who would take the credit, and this and that and so forth. But it was a special day."

Clark joined the Niners as a 10th round pick out of Clemson in 1979 in the same draft class that brought Joe Montana to San Francisco. He got there by good fortune after only 33 catches in three college seasons as former 49ers coach Bill Walsh needed someone to catch passes from Steve Fuller at a pre-draft workout.

Clark impressed Walsh enough to get drafted and eventually made the team even if he never felt comfortable despite playing on two Super Bowl winners, making two Pro Bowls and catching 506 passes for 6,750 yards and 48 touchdowns in nine seasons with San Francisco.

"He's meant the world to me for so many years," Montana said last year after a street near the site of the Candlestick Park was named for him. "We came into the league together and we laugh about things that he did all the time. I don't think he ever unpacked. By his rookie year he always left the playbook on his bed just in case he ever got cut. He kept trying to tell me he was getting cut every day, I kept trying to tell him, 'what are you doing? You're crazy.'"

Clark made his last public appearance in October when the 49ers hosted "Dwight Clark Day" at Levi's Stadium. Clark spoke to the crowd from a suite that afternoon in a weakened voice, calling his disease a "little thing" he was dealing with at the time. He also thanked the fans and dozens of teammates who came back for the event.

DeBartolo recently hosted a reunion in Montana where many of Clark's former teammates came for one final goodbye.

"For almost four decades, he served as a charismatic ambassador for our team and the Bay Area," the 49ers said in a statement. "Dwight's personality and his sense of humor endeared him to everyone he came into contact with, even during the most trying times. The strength, perseverance and grace with which he battled ALS will long serve as an inspiration to so many. Dwight will always carry a special place in our hearts and his legacy will live on as we continue to battle this terrible disease."

Full coverage on the 49ers here.