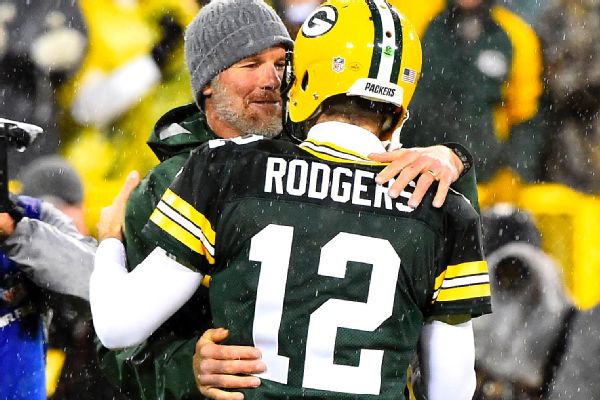 GREEN BAY, Wis. -- Aaron Rodgers doesn't deny that he called Brett Favre "Grandpa" at some point during their three years together in Green Bay.

But contrary to an excerpt published from therecently released book "Gunslinger: The Remarkable, Improbable, Iconic Life of Brett Favre," Rodgers said that was not what he called Favre upon their first meeting in 2005.

"The story that was out there that I saw is completely 100 percent false," Rodgers said Wednesday.

In the book excerpt published by Bleacher Report, the first interaction between Rodgers and Favre, the QB that Rodgers was drafted to eventually replace, was described like this:

Rodgers and Favre finally met on June 2, [2005], when the Packers came to town for a seven-practice organized team activity camp. Now merely a head coach (and a disgruntled one at that), [Mike] Sherman allowed Favre to skip the workouts, but that didn't mean he would not attend. In fact, that morning Favre was alone, sitting in the team cafeteria and reading a newspaper, when Rodgers saw him in person for the first time. The new quarterback approached the old quarterback and uttered what will forever go down as the worst introductory line in the history of professional sports.

In the book, backup quarterback Craig Nall corroborated the story, saying: "Brett couldn't believe that. It was like, 'Grandpa? Who the hell are you?'"

Neither Rodgers nor Favre spoke to the book's author, Jeff Pearlman, during his reporting.

However, Rodgers on Wednesday called the excerpt "highly sensationalized."

"I'll just say this: The first time I met Brett was on the practice field, and I could barely get a sentence out of, 'Hello, my name is Aaron,'" Rodgers said. "Did I call him 'Grandpa' at any time during the three years together? Probably. But it's in the same joking way that my man Brett Hundley called me 'Grandpa' three weeks ago on the field when we were doing a competitive drill.

"The story that was out there that I saw is completely 100 percent false, and I would dare anybody to test my memory on that. You guys know how my memory works. The end."

The relationship between Rodgers and Favre has been oft-discussed but whatever may have happened in the past, they appear to be in a good place now. They posed for a picture together with legendary Packers quarterback Bart Starr last year on Thanksgiving, and Rodgers attended Favre's induction into the Pro Football Hall of Fame this past summer.
Related topics:
sportsespnnflbrett favregreen bay packersaaron rodgersbrett hundleypackjeff pearlman
Copyright © 2021 ESPN Internet Ventures. All rights reserved.
More Videos
From CNN Newsource affiliates
TOP STORIES