Adam Jones: 'I would have $100 million' if not for past suspensions 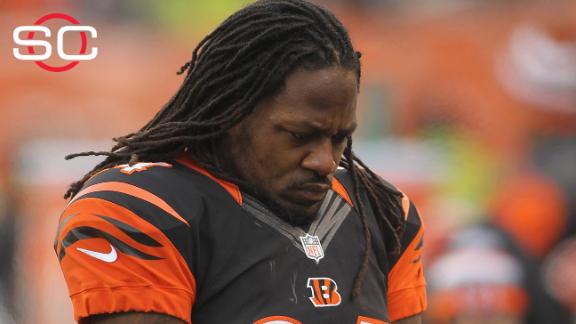 CINCINNATI -- Adam Jonessays he believes that had it not been for his controversial past, his career would long ago have hit financial heights he instead has since struggled to reach.

"If I would have never gotten suspended, I would have $100 million right now," the Cincinnati Bengals cornerback said Wednesday.

The comment came while Jones spoke about serving multiple on-field roles on the team. Reporters presented hypotheticals about whether Jones considered what his career might resemble if he were only a punt returner or only a kick returner, instead of playing both special teams positions in addition to cornerback.

Jones later told ESPN he thinks about his past "every now and then."

"You got to think about your past to get to your future," he said. "But I don't let it block nothing mentally or physically that I'm trying to do."

Few active professional athletes have the "ifa, coulda, woulda" story Jones does. Suspended twice near the start of his career for separate off-field incidents, Jones appeared in 24 games between 2006 and 2009 while playing for the Titans and Cowboys. The suspensions were the result of his involvement in an altercation with a bodyguard and for allegedly instigating a brawl in a Las Vegas nightclub that resulted in two men being shot, one of whom was left paralyzed. Jones wasn't the gunman, but a court ordered him in January to pay $12.4 million in damages related to the 2007 incident.

During the start of his comeback in 2010, Jones' early shot at on-field redemption was cut short by a neck injury. After appearing in five games that year, he didn't play again until Week 8 the following season.

Each year since, he has performed better and better statistically. His 63 tackles last season tied for a career high he first set in 2006, his second season. He also had three interceptions in 2014 to go along with a fumble recovery and an All-Pro kick returner selection. He had the highest kick-return average of players with more than 20 returns.

"He had a lot of ability and a lot of room to grow," Bengals coach Marvin Lewis said. "To his credit, he's taken advantage of it."

Although ordered to court two years ago for an incident in Cincinnati that a judge ultimately cleared him of, Jones in recent years has largely avoided the negative spotlight that defined the start of his career. It's well-timed, too, as he hopes for a possible contract extension. His previous deal -- the third he's signed with Cincinnati -- was a three-year, $5.35 million contract that came in 2013.

If not re-signed by March, he'll be eligible for free agency.

Jones wonders what could have been had it not been for his two years away from football.

"I was in the prime of my career," Jones said. "But it'll be all right. You live and you learn."