Adam Silver: 'Should be a regulatory framework' for daily fantasy operators 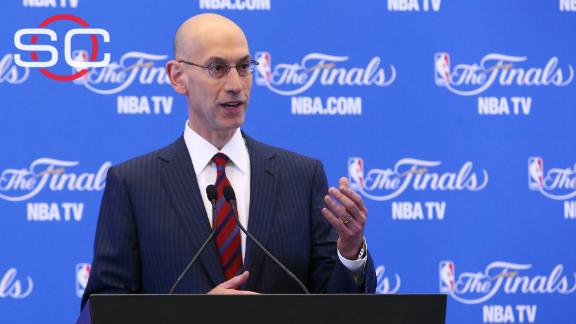 NBA commissioner Adam Silver on Wednesday called for federal regulation of daily fantasy operators and said his league will continue its partnership with FanDuel despite multiple investigations into industry trade practices and questions over the legality of the contests under federal and state gambling laws.

In the first extended comments by the leader of a major sport since daily fantasy became engulfed in scandal two weeks ago, Silver told Outside the Lines that he is "nervous" about the recent developments but welcomed the growing scrutiny as a path to regulation that will protect fantasy players.

FanDuel issued a statement echoing some of Silver's remarks: "FanDuel and our partners believe some regulation may be warranted and want to work with lawmakers to ensure fans continue to have access to all the fantasy games they love."

DraftKings did not respond directly to Silver's comments but also issued a statement.

"We strongly believe the games on our site -- and daily fantasy sports in general -- are legal. We are seeing a number of state regulators and other authorities taking a reasoned and measured approach to the daily fantasy sports business and hope that trend continues along with due consideration for the interests of sports fans across the country who love to play these games."

Bob Bowman, president of MLB Advanced Media, which has a stake in DraftKings, said regulation would be "welcome."

"It seems like a lead-pipe cinch that regulation is going to be coming," he said.

Such comments come at a pivotal time for the industry, which is facing federal investigations in New York and Florida, regulatory scrutiny in several states, the possibility of Congressional hearings and a spate of lawsuits, all at a time when FanDuel and its rival, DraftKings, are blanketing airwaves with advertising.

Silver and the NBA have sought to lead the national debate on sports betting. Last November, in a New York Times editorial, he called for legal, regulated sports betting, a dramatic departure from the previous position of every major sport. His public stance coincided with the NBA's announcement that it had acquired an ownership stake in FanDuel, a deal that the company's founder described as "a true partnership."

But after a DraftKings employee admitted that he released privileged information and won $350,000 on FanDuel, the NBA, like other stakeholders, found itself swept up in the fallout. The Wall Street Journal reported Tuesday that a New York prosecutor is examining whether daily fantasy violates federal gambling laws. A Florida grand jury is reportedly investigating similar issues, including the handling of insider information, along with the FBI.

Silver acknowledged he is concerned. But he said he is also concerned about the lack of regulation in the multibillion-dollar sports gambling market.

"Are we nervous about daily fantasy and the varying states' reactions to it right now? Sure," he said. "But am I nervous about a $400 billion underground industry of sports betting right now? Absolutely. In terms of the very public positions I have taken on sports betting, my foremost concern is with the integrity of our game."

Asked if he thought daily fantasy is, in fact, gambling, Silver replied: "I don't, because of the legal definition of daily fantasy vs. what sports betting is. ... Daily fantasy, as it's currently constructed, is clearly a game of skill."

Silver said the NBA conducted its own analysis to determine that daily fantasy is legal, based on a "carveout" in the 2006 Unlawful Internet Gambling Enforcement Act that exempted fantasy sports. That analysis occurred, he said, before the league entered into its agreement with FanDuel.

"We believe we are following federal law in this case and are clearly on the protected side of the law," he said.

Some legal observers believe that the NBA and other sports leagues with financial ties to FanDuel and DraftKings could be drawn into the investigations. Silver said the NBA has not been contacted by law enforcement authorities, nor has the league received a subpoena related to the investigations. Under a 1970 law, prosecutors can target anyone involved who owns, finances or directs illegal gambling.

Silver downplayed the extent of the NBA's financial relationship with FanDuel: "We have a small equity position in the company and a business relationship with them, but we are not a decision-maker with them," Silver said. The NBA acquired a small ownership stake in the company -- less than 10 percent, according to a source familiar with the agreement -- in exchange for making FanDuel the league's official daily fantasy partner.

"We didn't write them a check; we're not cash investors," Silver said.

On its website, FanDuel lists a senior NBA official, Salvatore LaRocca, as a member of the company's board of directors. But Silver and LaRocca denied that was the case.

"He's an observer, not a board member," said Silver.

LaRocca, the NBA's president of global operations and merchandising, said he attends FanDuel board meetings but does not vote and provides advice only "if I'm asked an opinion."

A spokeswoman for FanDuel confirmed that description of LaRocca's role, adding that LaRocca also receives all email correspondence related to the board.Shortly after being contacted by Outside the Lines on Wednesday, FanDuel added the word "observer" next to LaRocca's name.

Silver said the NBA decided to get involved with FanDuel to have a better understanding of the mushrooming business.

"It was our view that we're much better off inside the tent than outside the tent and understanding exactly what's going on with these businesses and being able to take knowledgeable positions in terms of how these business can become more transparent and ultimately develop a regulatory framework that makes sense for consumers," he said.

Silver said he believes that sports gambling has become so pervasive that the NBA has no choice but to participate on some level.

"The Democratic debate took place in a casino, with hardly anyone noticing," he said. "Forty-three of our states have casinos, 44 states have lotteries. That's the context in which we're operating.

"The industry exists, and it's my view that you have to engage in it. What's happened with daily fantasy is what happened with virtually every other industry that's out there: The Internet has disrupted it. Now that that's happened, what should our reaction be?

"My reaction is to engage directly. To the extent that federal or state regulators are stepping in, my reaction is, that's very positive, and we'd like to be part of those conversations. Because it's ultimately our game, our intellectual property and most importantly, what's at stake is the integrity of our game."