Alabama No. 1 in CFP rankings 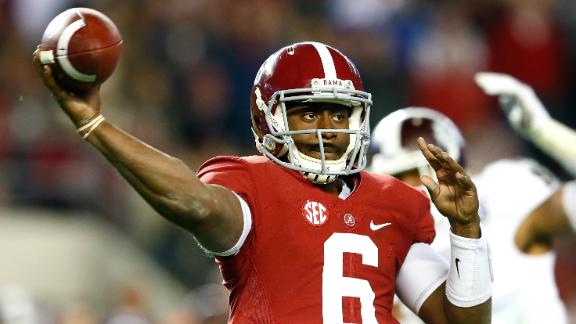 The race for the fourth and final spot in the playoff is shaping up to be a tussle between four teams.

Alabamajumped from fifth to first after handing previously undefeated and top-ranked Mississippi Stateits first loss on Saturday. The Bulldogs slid to fourth.

Oregonstayed in second, and Florida Stateis now third. The Seminoles are the only undefeated team left in a Big Five conference.

Florida State fans might not be happy about how their team is being treated, but the Seminoles appear to be safe if they can keep winning right through the Atlantic Coast Conference championship game. Same goes with Alabama in the Southeastern Conference and Oregon in the Pac-12.

After that, things get complicated.

Mississippi State is followed by TCU, which slipped to No. 5 after a closer-than-expected win against Kansason Saturday. Ohio Statemoved up two spots to No. 6, ahead of TCU's Big 12 rival Baylor.

The Bulldogs play Vanderbilton Saturday but finish the regular season at Ole Miss, giving them a chance for another resume-boosting victory. They could use it because their best wins from early in the season (LSU, Texas A&Mand Auburn) have been tarnished a bit lately.

Ohio State is in position to play in the Big Ten championship if it wins out.

The Big 12 has no conference championship game. TCU and Baylor would be co-champs if each finishes 11-1, but Baylor beat the Horned Frogs in Waco, Texas last month.

The selection protocol calls for the committee to use championships won as a tiebreaker if teams have similar resumes.

"I don't think there is any way to project that," said Long, the athletic director at Arkansas. "It will certainly be weighed into the equation on Dec. 6 and 7."

The committee releases its final rankings on Dec. 7, the day after most of the conference championship games are played.

Long said Alabama controlled the game in its 25-20 victory against Mississippi State enough to earn the big promotion this week. Alabama led by two scores in the fourth quarter and Mississippi State cut the lead to five with a touchdown with 15 seconds left.

Long referred to game control a few times this week. It's not a metric used by the committee but a subjective discussion about how the game was played.

TCU rallied for a 34-30 victory against Kansas, and Long noted how the Horned Frogs' inability to control the game against struggling team negatively affected their resume.

"While they have certainly added to their resume and shown they are a better team, it doesn't erase that loss," Long said of the Buckeyes.

The committee still doesn't have a team from outside the Big Five conferences in its rankings but will have to pick the best of that group in the final rankings to fill a guaranteed spot in the New Year's bowls.