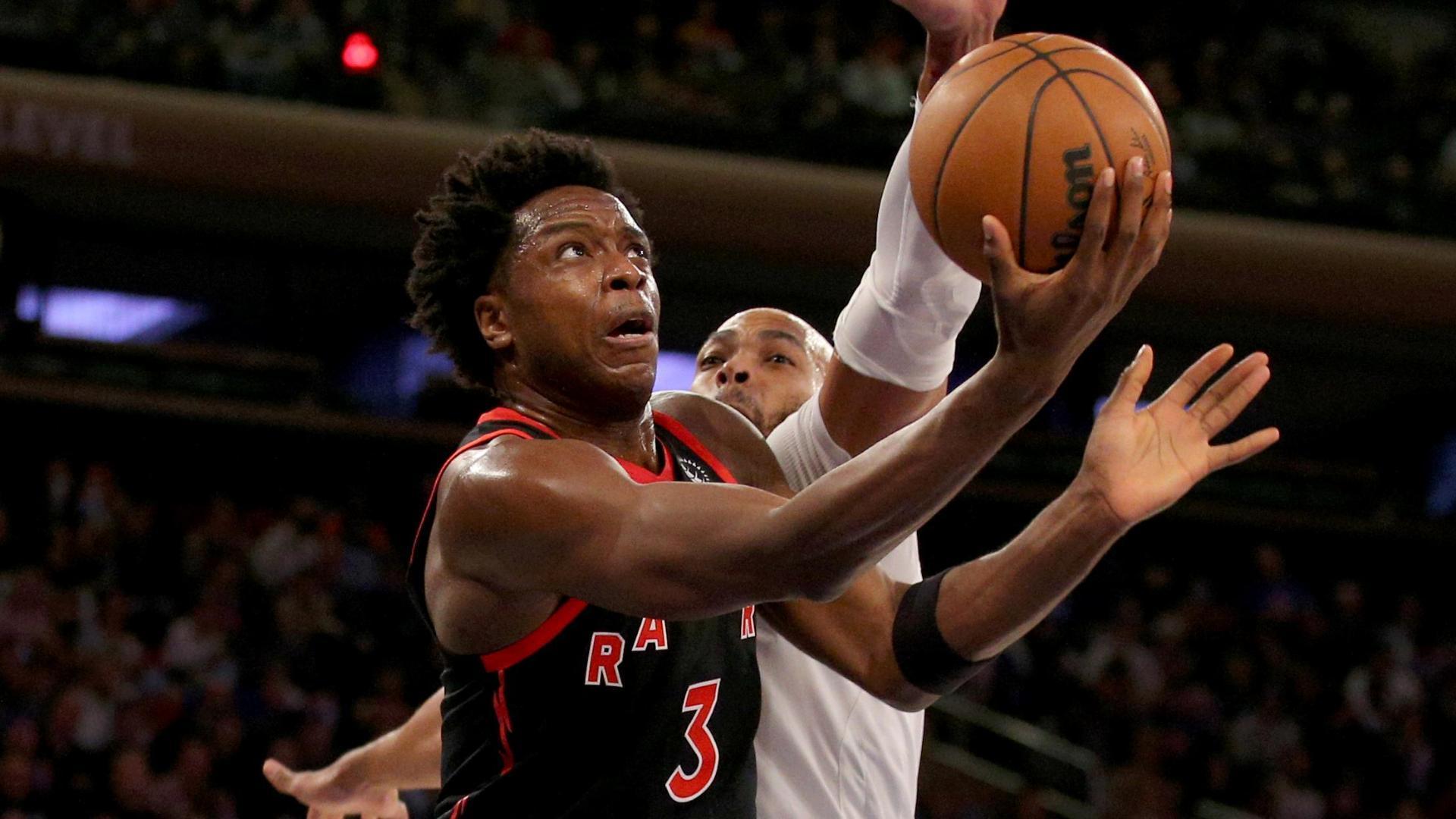 NEW YORK -- - The Toronto Raptors were midway through a dominant third quarter when Svi Mykhailiuk's basket gave them the lead for good.


With a shot clock and 3-pointer in today's game, the Raptors just kept right on scoring.

Anunoby had a career-high 36 points and the Raptors won their fourth straight by beating the New York Knicks 113-104 on Monday night in the 75th anniversary of the NBA's first game.

Gary Trent Jr. added 26 points for the Raptors, who surged into the lead by outscoring the Knicks 38-22 in the third quarter. Fred VanVleet finished with 17 points, nine rebounds and seven assists.

The Raptors were so good in the third that coach Nick Nurse didn't make a substitution, something he couldn't recall happening in his time as their coach.

"Those guys were just on an incredible tied-together roll," Nurse said.

The Knicks beat the Toronto Huskies on Nov. 1, 1946, at Maple Leaf Gardens. They were in good shape to win this one and continue their strong start to the season, before the Raptors ran right by them.

The Raptors had a 21-3 advantage in fast-break points, turning 17 Knicks turnovers into 20 points. Anunoby pointed to that as a key to the third quarter.

"Just being aggressive, shooting with confidence. Getting stops and running out," he said.

But Knicks coach Tom Thibodeau thought the pivotal point of the game was actually earlier, when the Knicks lost most of a 15-point lead they had with 4 1/2 minutes left in the first half.


"It was really the middle of the second quarter. That's where the game turned," Thibodeau said.

It never turned back after Mykhailiuk's 3-pointer made it 68-66 with 7:22 left in the third. Toronto was up 91-79 by the time the quarter ended and by as much as 15 in the fourth quarter.

Mykhailiuk finished with 15 points in place of Scottie Barnes, who was leading all rookies with 18.1 points and 8.9 rebounds per game. He has a sprained right thumb.

RJ Barrett scored 27 points for the Knicks, who were trying for their first 6-1 start since 2012-13. Julius Randle had 22 points, nine rebounds and five assists.

The Raptors made seven 3-pointers in the third quarter after hitting just five in the first half. Anunoby and VanVleet each scored 10 in the period, and Toronto kept a double-digit lead for most of the fourth quarter.

Raptors: Precious Achiuwa started at center but Nurse went with Khem Birch to start the second half after Achiuwa was 1 for 6. The Raptors outscored the Knicks by 20 points with Birch in the game. ... Nurse said there was no timeline for Barnes, saying the No. 4 pick's thumb was tender and sore but didn't seem awfully bad. ... Anunoby's previous best was 32 points.


Knicks: The Knicks were short-handed at center after backup Taj Gibson played just 10 minutes before leaving with a sprained left ankle. Nerlens Noel is still out with a sore left knee. .... The Knicks are one of only three franchises to play in every NBA season, along with the Boston Celtics and the Warriors, who were the Philadelphia Warriors when the league began.

Nurse liked the idea of the NBA scheduling another New York-Toronto matchup exactly 75 years after the first one.

"The rematch. I think we owe them one, don't we?" he joked before the game.