Astros will start Lance McCullers Jr. in Game 4 of ALCS 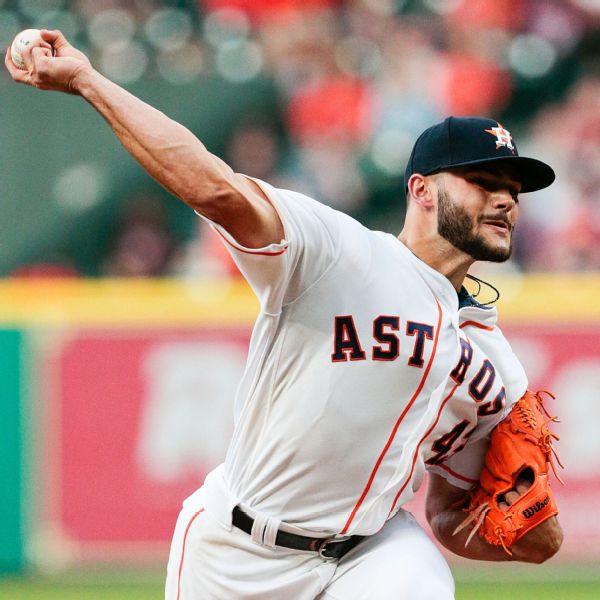 NEW YORK -- In an attempt to throw the New York Yankees a curve Tuesday in Game 4 of the American League Championship Series, the Houston Astros will give the ball to curveball artist Lance McCullers Jr.

But it's also a roll of the dice.

McCullers was one of the best pitchers in the league through the season's first three months, going 7-1 with a 2.69 ERA in 15 starts and earning an All-Star Game selection. But a back problem and arm fatigue limited him to six starts in the second half, as he posted an 8.23 ERA.

Which version of McCullers will show up Tuesday evening at Yankee Stadium? The answer might just swing the series.

"I think that's the unknown," said Astros manager A.J. Hinch, who waited until after Monday night's 8-1 loss to the Yankees to name McCullers as the Game 4 starter. "He's a really good pitcher. He's got really electrifying stuff, some of the best stuff in the big leagues."

McCullers didn't start in the Astros' division series victory over the Boston Red Sox. He made a relief appearance in Game 3 at Fenway Park and tossed three scoreless innings before leaving two runners on base, both of whom scored on hits against Chris Devenski.

"Up to that point, I just felt like I was in control again," McCullers said. "I felt like I was dictating the game on my terms a lot more. I felt like I have been in a whirlwind that second half [of the season] when I've been out there. I just feel confident with my pitches and my stuff again, and I'm ready to go out there [Tuesday]."

The Astros had two alternatives to McCullers. They could've gone with right-hander Brad Peacock, who went 13-2 with a 3.00 ERA during the regular season but gave up three runs in only 2 innings of a Game 3 start against the Red Sox. They also could've brought back ace lefty Dallas Keuchel on three days' rest. Keuchel shut out the Yankees for seven innings in Game 1 and held them scoreless for six innings on short rest in the 2015 wild-card game at Yankee Stadium.

"He's really good," Hinch said, adding that he was encouraged by McCullers' most recent side session. "I don't have to remind all you guys, he was an All-Star to start the year. He has some of the best stuff in the big leagues, and we believe in him."

McCullers is known for his curveball. He threw it 48 percent of the time during the regular season and held opponents to a .195 average and .298 slugging percentage, according to pitch data accumulated by the Brooks Baseball website.

The Astros opened the series with back-to-back 2-1 victories in Houston by leaning on their one-two punch of Keuchel and Justin Verlander. Of the Yankees' 67 plate appearances in the first two games, 58 came against the Astros' co-aces.

In Game 3, the Yankees faced the considerably softer middle of the Astros' rotation. Right-hander Charlie Morton gave up bloops, bleeders and a three-run homer on a low-and-away pitch that Todd Frazier lunged for and hit with one arm over the right-field fence. Morton also didn't get much help from his defense, as left fielder Cameron Maybin let a fly ball drop in front of him for a ground-rule double to open a five-run fourth inning.

"We were trying to go up and in on [Frazier]. I just pulled it," Morton said. "If you were to show me a video of his swing, the pitch speed and the location, I would have never thought [he would hit it out]. That was unbelievable. That's a ball where maybe it's a bloop to right or he fouls it off. It was just a great piece of hitting to get the barrel on it."

But Morton's inability to survive the fourth inning, and the three-run homer to Aaron Judge allowed by reliever Will Harris, only underscored the Astros' suspect pitching depth beyond Keuchel, Verlander and closer Ken Giles.

McCullers, Houston's second-best pitcher for half the season, can change that with a strong start in Game 4.

"It's a big game for us. It's a big game for the team," McCullers said. "It's a big situation to be able to pitch in, put us within a game of the World Series."
Report a correction or typo
Related topics:
sportsespnmlbalcslance mccullers jrnew york yankeeshouston astroshou
Copyright © 2021 ESPN Internet Ventures. All rights reserved.
More Videos
From CNN Newsource affiliates
TOP STORIES